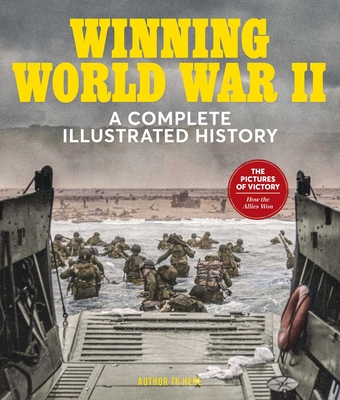 
In Stock—Click for Locations
How exactly did we win the war? In a stunningly visual syyle, this illustrated book chronicles World War II from the early rise of Germany's dictator, to the landing of troops in Normandy and the eventual victory over evil.

More than seventy-five years ago, the greatest conflict in the history of mankind came to an end. Winning World War II shook the foundations of modern civilization, leaving millions upon millions dead and wounded and once great cities in ruins. Out of the horror, however, a new world was born. It’s no wonder the War is still being depicted in movies, books and documentaries. With this book, readers will look back at the cataclysm that shaped who we are, from the rise of Adolf Hitler and Japanese militarism to the great battles and dramatic turning points upon which the fate of humanity hung. We profile the inimitable leaders who guided their nations to glory and ruin — Hitler, British Prime Minister Winston Churchill, Soviet dictator Joseph Stalin, and America’s president, Franklin Roosevelt — and examine the deadly weapons that turned the tide of the fighting and launched the atomic age. And we look back at the sacrifices that Americans at home made to win the war.
David Schonauer has written on subjects ranging from the Apollo 11 moon mission and rock climbing to environmental law and the history of paparazzi photography. His work has appeared in The Atlantic, The New York Times, Smithsonian, Outside and many other publications. He is the former editor in chief of American Photo magazine and the recipient of the National Magazine Award. He lives in Beacon, New York.