Dorothy & Herbert: An Ordinary Couple and Their Extraordinary Collection of Art (Hardcover) 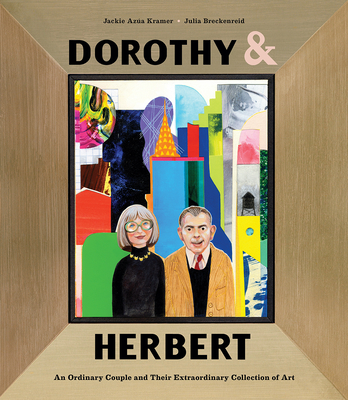 Dorothy & Herbert: An Ordinary Couple and Their Extraordinary Collection of Art (Hardcover)

In the heart of Manhattan lived a librarian and a postal clerk who loved art so much that they collected it. Over the years, Dorothy and Herbert brought home hundreds of works of art—from little-known SoHo artists to luminaries such as Chuck Close and Christo and Jeanne-Claude—to their small, empty-walled apartment, much to the curiosity and delight of their eight cats and tank of fish. Their passion for art and support of artists was so impressive, Dorothy and Herbert became famous themselves. And when they gifted their extraordinary collection to the National Gallery of Art, their art became ours, inspiring new generations of artists.
Jackie Azúa Kramer is an award-winning children’s book author whose books include Dorothy & Herbert: An Ordinary Couple and Their Extraordinary Collection of Art, published by Cameron Kids. Her hopes are to write stories that reflect who children see in the mirror and what they see out of their windows. She lives with her family in Long Island, New York. Jonah Kramer is a New York City–based actor, singer, dancer, and now children’s book author. He has travelled as a performer both nationally and internationally. He is delighted to coauthor his first book with his amazing mom. Zach Manbeck is a children’s book author and illustrator who loves to create stories that advocate for characters that haven’t yet had a chance to live in books. He lives in Philadelphia.
"Lyrical, energetic text and memorable, innovative illustrations (including a particularly dramatic double gatefold) capture the Vogels’ love of art and the artists of New York’s SoHo community, show how Dorothy and Herbert became mentors and hosts, and include interesting details. Overall, this is a warm and thoughtful depiction of the two collectors as well as an engaging introduction to the world of modern art."
— Kirkus Reviews

"An eccentric tumble down an unexpectedly accessible bio of two fans who made their passion into a way of life, and just the kind of adventure that many children will find inspiring."
— School Library Journal

"The mid-century-style illustrations convey the movement and energy of life in the 1960s; they also depict the Vogels' home, crowded with artwork, animals, and (famous) friends."
— Horn Book Magazine