Now Is the Hour of Her Return: Poems in Praise of the Divine Mother Kali (Paperback) 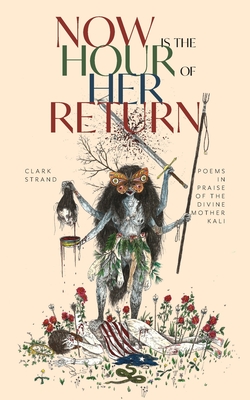 Now Is the Hour of Her Return: Poems in Praise of the Divine Mother Kali (Paperback)

By Clark Strand, Will Lytle (Illustrator)

"A treasure of mystical poetry, these poems pulsate with truth." --Carolyn Myss, author of Intimate Conversations with the Divine and Anatomy of the Spirit

In the early hours of June 16, 2011, Clark Strand witnessed a startling apparition of the Divine Feminine in the form of a young woman with an X of black electrical tape over Her mouth. Strand removed the tape, and She began to speak of a coming age of chaos and collapse in which the world of humankind would be severely chastened so that Her world--the world of Nature--could be renewed. Overwhelmed by the presence of One so fully Other, Strand found that love was the only language that would suffice. Drawing inspiration from Song of Songs and the Bengali mystics Ramprasad and Sri Ramakrishna, he began a series of poems to Ma Kali, the Dark Goddess of India, the words to which often came from the Great Mother Herself.