We Were There: The Third World Women's Alliance and the Second Wave (Paperback) 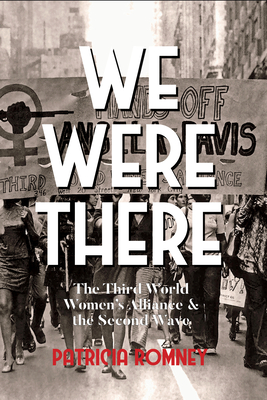 We Were There: The Third World Women's Alliance and the Second Wave (Paperback)

"Fifty years ago, the Third World Women's Alliance passionately insisted on interconnections among racism, sexism, and capitalism, inspiring radical analytical frameworks and organizing strategies associated with contemporary conceptions of feminism. We are deeply indebted to Patricia Romney for helping to generate a record of the Alliance's pioneering contributions and thus for ensuring that their revolutionary legacies live on." --Angela Y. Davis, author of Freedom Is a Constant Struggle

From 1970 to 1980, the Third World Women's Alliance lived the dream of third world feminism. The small bicoastal organization was one of the earliest groups advocating for what came to be known as intersectional activism, arguing that women of color faced a "triple jeopardy" of race, gender, and class oppression. Rooted in the Black civil rights move-ment, the TWWA pushed the women's movement to address issues such as sterilization abuse, infant mortality, welfare, and wage exploitation, and challenged third world activist organizations to address sexism in their ranks. Widely recognized as the era's pri-mary voice for women of color, this alliance across ethnic and racial identities was unique then and now.

Interweaving oral history, scholarly and archival research, and first-person memoir, We Were There documents how the TWWA shaped and defined second wave feminism. Highlight-ing the essential contributions of women of color to the justice move-ments of the 1970s, this historical resource will inspire activists today and tomorrow, reminding a new generation that solidarity is the only way forward.

Patricia Romney received her PhD in clinical psychology from the City University of New York. She is a retired professor who taught at Hampshire College and Mount Holyoke College, and is the coeditor of Understanding Power: An Imperative for Human Services. She is based in Amherst, MA. Farah Ameen is a Bangladeshi American writer and editor who has worked at major national magazines for decades. She is passionate about issues of women's rights, race, and the immigrant experience. She lives in Amherst, MA.