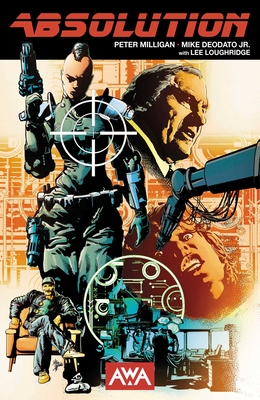 
Coming Soon—Pre-Order Now
Nina Ryan is a hired killer who's given a second chance at life—as long as she can earn ABSOLUTION. How to do that? Earn enough followers for her audacious online exploits to keep the bombs in her head from going off!

Nina Ryan was a hired killer who brought nothing but pain and suffering to the world.

Now, she has a month to prove that she can change. A month to make up for her crimes and find absolution, or the bombs that have been implanted in her head will explode, killing her instantly.

As her journey of atonement is live-streamed to a fickle public, Nina is about to discover that the road to redemption might be splattered with blood.
One-time Entertainment Weekly’s “Man of the Year,” Peter Milligan was at the forefront of the revolution in comics which were created for a more sophisticated, adult audience. Shade the Changing Man for Vertigo offered a skewered look at American culture, while Enigma, Face and Rogan Gosh pushed the boundaries of what comic books could do. The hugely-popular X-Statix was a radical reworking of the X-Man paradigm, described by Kevin Smith (CLERKS) as “the most well-observed scholarly analysis of media-manipulation filtered through a pop-culture lens ever committed to the page.” Milligan is currently working on other film, comic and non-comic book projects.