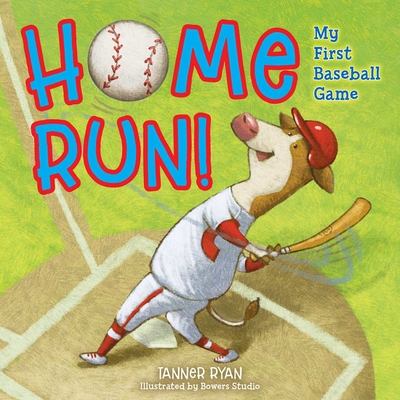 
Not On Our Shelves—Ships in 1-5 Days
Take kids out to their very first ballgame in this adorable storybook for our youngest fans!

The bases are loaded
as two more Cows get on base.
It’s the clean-up hitter
against the Bears’ pitching ace!

This charming, illustrated sports book for toddlers features the game of the year: the Cows vs. the Bears! Each spread introduces baseball terms, gear, players, and umps within the context of the story of a nine-inning game between all-animal teams. Read along as the Cow shortstop leaps for an inning-ending catch, a Bear runner slides home . . . “Safe!” . . . all culminating in a bottom-of-the-ninth showdown that is the epitome of a never-to-be-forgotten baseball classic!
Bowers Studio has created content for children’s books in both, the trade and educational industries for nearly twenty years, with several books having landed on the New York Times Bestseller lists. The studio also supplies artwork for other products such as puzzles, fabric design, garden flags, greeting cards, and more.