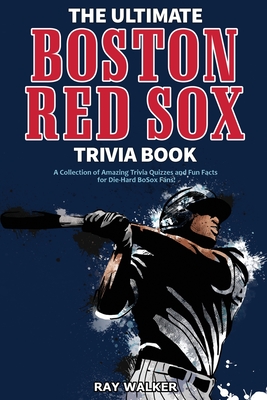 Are you a die-hard Red Sox fan?

Now you surely will be with The Ultimate Boston Red Sox Trivia Book. If you want to know all the ins and outs (every great baseball team has a few ) of one of the most famous baseball teams ever in the AL and MLB-this book is for you.

The next time you walk into a bar, your friend's or father-in-law's place for Trivia Night, you'll be a smash hit knowing about Boston Red Sox legends like "The Splendid Splinter" Ted Williams and Yaz, pitchers like Pedro and the Rocket, classic catchers like Carlton, and sluggers like Foxx, Big Papi, and Tris.

With this ultimate BoSox trivia book, you'll have a handle on the 86-year-long "Curse of the Bambino," caused by the hasty sale of Babe Ruth, and why Fenway Park is the most famous ballpark going. You and your buddies will hear how the Red Sox Nation is trying to gain the upper hand against the "Evil Empire," none other than Boston's archrivals the New York Yankees.

What ultimate Boston Red Sox trivia will you score with this valuable book? Catch the answers to all these tricky trivia questions and tons more:

- When was Fenway Park inaugurated?

- What stunts did Red Sox fans try to stop "the Curse of the Bambino"?

- When did Boston win its first World Series championship this century?

- Which BoSox hurler wore a bloody sock in the historic ALCS win over the Yanks in 2004?

Dear Red Sox fan: your Ultimate Boston Red Sox Trivia Book comes with 15 chapters chock-full of questions, answer pages, and fun factoids about your favorite team. Quiz Night coming? Be ready Have a blast with your trivia book all about the unbelievable Boston Red Sox.