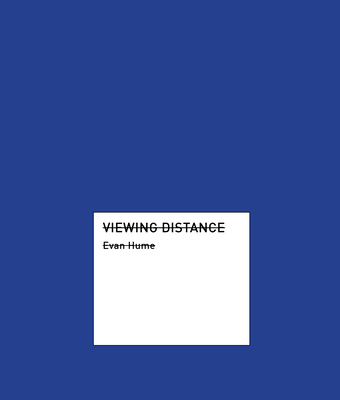 
Not On Our Shelves—Ships in 1-5 Days
Viewing Distance compiles and transforms declassified material from US government archives to examine photography as a tool of the military-industrial complex for reconnaissance, surveillance, and documentation of advanced technologies. While many of the source images for this body of work date back to the middle 20th century, they have only recently been released and much information remains secret. These pictures represent the decades-long time delay from when knowledge comes into being and when it becomes publicly accessible. The Cold War period that much of the material originates from is a significant turning point in photography's technological development and use for intelligence gathering. The book combines photographs pertaining to the clandestine innovations and operations of that era with contemporary documents and devices, connecting past and present. Processes including analog printing, digital collage, scanner manipulation, and data bending are used to animate the archival material. Through this disruption and layering, historical fragments are presented in a state of flux, open to alternate associations and implications. What we are allowed to know and see is often incomplete and indeterminate, encouraging speculation and critical vision.--Evan Hume "Evan Hume.
Evan Hume is an artist based in South Bend, Indiana where he is the Visiting Lecturer of Photography at the University of Notre Dame. He earned his BFA from Virginia Commonwealth University and MFA from George Washington University. Raised in the Washington, DC area, Hume's approach to photography is informed by the experience of living in the nation's political center for much of his life and focuses on the medium's use as an instrument of the military-industrial complex and intelligence apparatus. He has exhibited widely at venues including Fotografiska (New York, NY), Filter Photo (Chicago, IL), and Furthermore (Washington, DC). Hume's work has been featured by publications such as Aperture and Der Greif, and is included in the Museum of Contemporary Photography's Midwest Photographers Project.