The Complete America’s Test Kitchen TV Show Cookbook 2001–2023: Every Recipe from the Hit TV Show Along with Product Ratings Includes the 2023 Season (Hardcover) 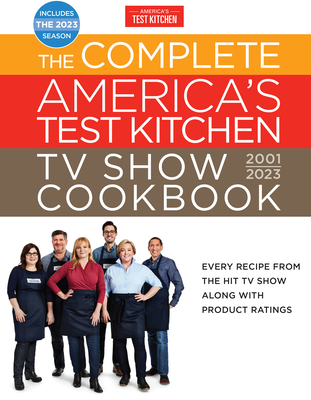 The Complete America’s Test Kitchen TV Show Cookbook 2001–2023: Every Recipe from the Hit TV Show Along with Product Ratings Includes the 2023 Season (Hardcover)


On Our Shelves Now at:
1,800 foolproof recipes from 23 years of the hit America's Test Kitchen TV show captured in one volume

The Complete America's Test Kitchen TV Show Cookbook is a living archive of every recipe that has been on every episode of public television's top-rated cooking show, including the new season that debuts in January 2023. It also includes the top-rated equipment and ingredients from the new testing and tasting segments.

Cook along with Bridget and Julia and the test kitchen chefs as the new episodes of the 2023 season air with all-new recipes. Every recipe that has appeared on the show is in this cookbook along with the test kitchen's indispensable notes and tips. A comprehensive shopping guide shows readers what products the ATK reviews team recommends and it alone is worth the price of the book.
America's Test Kitchen produces public television's top-rated cooking shows, America's Test Kitchen and Cook's Country, along with award-winning cookbooks and Cook's Illustrated and Cook's Country magazines. It is a very real 15,000-square-foot kitchen located in Boston's Seaport district and is home to more than 60 test cooks, editors, and tasting and testing experts. Over 2 million viewers tune in to watch America's Test Kitchen every week no PBS as well as more on OTT channels.