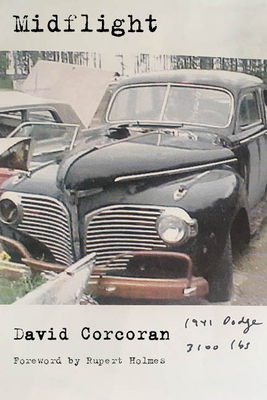 A posthumous collection, Midflight collects the poems written by beloved science editor and journalist David Corcoran in the latter part of his life. Idling in a space between the pastoral and the ordinary, Corcoran’s lyrical world maps the sublime mundanity of nature while exploring memory, dreams, and consciousness itself. Corcoran’s lines abound with figures living and long deceased, with the dead walking onstage as if they never left. Describing the accident that killed his father when he was a toddler in “Here,” Corcoran writes, “the door [opens] in midflight / and [pitches] him out.” In “Last Questions,” he asks, “Are you my brother or / a mockingbird?” While these haunting, vivid poems have an aching prescience, imbued as they are with the awareness of human ephemerality, the gift they proffer, to the writer and the reader at once, is the sense of finding oneself midflight, in midair, betwixt sky and ground, in the free fall of being—going and going and never gone.

David Corcoran was born in New York City in 1947 and was raised in nearby Rockland County. A lifelong journalist, he began his career as a boy, covering sports at the local paper. He attended Amherst College and continued in newspapers, ultimately working as a writer and editor at The New York Times, where he retired as editor of the weekly section, Science Times. His poems have appeared in The Adirondack Review, Barrow Street, Fovea, and Podium. David Corcoran died in 2019. This is his first book.

“David’s poems bring me back to basics. His eyes had real power. He understood that good poets must remain young. It is like a curse: having to reinvent the world with our eyes. I don’t want to say goodbye to him. I am sure he wrote these trenchant poems, in part, to heal himself.”
—Henri Cole

“A rare gift—allow yourself to be carried along by these poems and by the end you will have glimpsed the interior landscape of another human being, which is where I find myself now, on the other side of this strange and beautiful collection. Opening this book was like entering a dream—surreal, yet grounded in the things of this world—ash, stone, water. Desire is the subtext, which means that death is always nearby, lurking, playing its unsettling, essential, inevitable music.”
—Nick Flynn

“As an editor, which is how I first met him, David Corcoran improved every piece of writing he touched with his deft sensitivity to ideas and meaning. As a poet, which is how I grew to know him, he is a rare gem. His lapidary explorations of nature, family, love and loss are gifts to savor—and to come back to again and again.”
Cornelia Dean