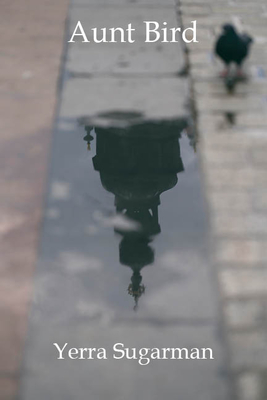 Aunt Bird is an astonishing, hybrid poetry of witness that observes and testifies to social, political, and historical realities through the recovery of one life silenced by the past. Within these pages, poet Yerra Sugarman confronts the Holocaust as it was experienced by a young Jewish woman: the author’s twenty-three-year-old aunt, Feiga Maler, whom Sugarman never knew, and who died in the Kraków Ghetto in German-occupied Poland in 1942. In lyric poems, prose poems, and lyric essays, Aunt Bird combines documentary poetics with surrealism: sourcing from the testimonials of her kin who survived, as well as official Nazi documents about Feiga Maler, these poems imagine Sugarman’s relationship with her deceased aunt and thus recreate her life. Braiding speculation, primary sources, and the cultural knowledge-base of postmemory, Aunt Bird seeks what Eavan Boland calls “a habitable grief,” elegizing the particular loss of one woman while honoring who Feiga was, or might have been, and recognizing the time we have now.

Yerra Sugarman is also the author of Forms of Gone (Sheep Meadow Press, 2002), which won PEN American Center’s PEN / Joyce Osterweil Award for Poetry, and The Bag of Broken Glass (Sheep Meadow Press, 2008), poems from which received a National Endowment for the Arts Fellowship. Her other honors include a Glenna Luschei Prairie Schooner Award, a Canada Council for the Arts Grant for Creative Writers, the Poetry Society of America’s George Bogin Memorial Award and Cecil Hemley Memorial Award, a Chicago Literary Award, and a “Discovery”/The Nation Poetry Award. Her poems have appeared or are forthcoming in Ploughshares, Colorado Review, The Nation, AGNI, Prairie Schooner, New England Review, and elsewhere. She earned an MFA in Visual Art from Columbia University, and a PhD in Creative Writing and Literature from the University of Houston. Born in Toronto, she lives in New York City.

“The angel of history’s wings were forced open, Walter Benjamin wrote, by a gust from Paradise. Unable to reorient himself, he flies into the future with his face to the past, devastated by the atrocities that pile up at his feet. In Aunt Bird, Yerra Sugarman comes to us as our own angel of history, the afterimage of the Holocaust indelibly marking her lyric vision. In this book length elegy, Sugarman works at the intersection of historian, mourner, and niece, lovingly revivifying her lost Aunt Feiga on the page, showing the reader how grief can be a life-long project, with its own demands and ethics. The dead may be irrevocably gone, but as Sugarman reminds us, not everyone who dies is lost.”
—Jason Schneiderman

“‘To remember is both plague and song.’ This is one of the myriad striking lines in Yerra Sugarman’s Aunt Bird, a book of holocaust poems like no other. What can we know of this ‘genocidal little earth?’ What must we invent? Sugarman’s intense—even glorious—lyrical poems draw song from a life the poet is compelled to imagine, never having actually met this aunt whose name in Yiddish meant ‘bird.’ ‘Her life was like a thick soup in my mouth,’ the poet confesses. Language in these poems is pummeled and ‘exploded like melons,’ watches as ‘the sky / is pulled back like a bandage from the skin,’ understands that ‘courage is like meat packed in ice . . . it can’t free anything.’ Yet beauty is a kind of freedom, and the surreal beauty of this book is as compelling as its tragedy.”
—Alicia Ostriker, New York State Poet Laureate

“‘You come alive,’ Yerra Sugarman writes near the start of Aunt Bird, addressing the book’s title character. In this exquisite, transportive collection, Sugarman enacts the longing of so many who lost relatives during the Shoah: to preserve the memory of the murdered, to restore their humanity and individuality, and to erase erasure itself. Sugarman depicts Aunt Bird—or Feiga Maler, as was her given name—as a young woman capable of finding ‘brutal beauty’ even in the Kraków Ghetto, a landscape of high walls and razor wire. ‘To imagine no one completely vanishes,’ Sugarman asserts, ‘is to believe a person is / not rescued or preserved only as a body.’ Through these poems, Aunt Bird is imagined into life again; she is unvanished. And we are fortunate to know her.”
—Jehanne Dubrow

“Yerra Sugarman’s dramatic poems—eloquent acts of reparation—ask questions of what hasn’t been experienced, what can never be remembered or discovered.  Armored by an ethical precision that permits her to confront a legacy of terror, she wraps trauma in layers of conjecture, surmise, lament. Rigorously conscious of elegy’s contradictions, Sugarman composes her plaints with a haunting reticence, a wise attention to historical specificity, a sonorous lyricism, and a scrupulous respect for meanings that must be left mysterious.”
—Wayne Koestenbaum