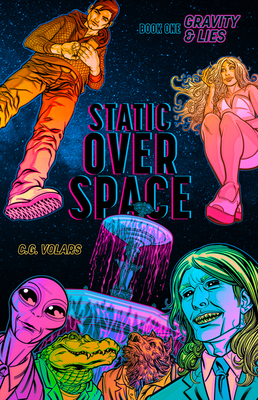 
Not On Our Shelves—Ships in 1-5 Days
Most cosmopolitan city in the universe, and a guy can't even get a freakin' sandwich.

It should be the least of Izo's concerns. Afterall, he's already been kidnapped by aliens and dragged halfway across the galaxy so they can make a buck off his abilities. And sure, he knew being able to fly made him a little unique. But he had no idea the cult-like—yet strangely marginalized—reputation Avarians held beyond Earth's boundaries. As he arrives on the Imperial Capital, IA, he's got one choice: cooperate with his captors so they'll get him back home, or split and head out on his own, taking his best shot at returning to Earth—a planet no one's ever heard of.

It isn’t much of a choice. Being extorted by a mean reptile, a tele-empathic linguist, and a giant teddy bear who could crush a car seems as bad as it gets—until a powerful CEO-Senator appears from deep within the IA’s darkest corners. With things changing from annoying to alarming, it’s up to Izo to navigate a dangerous game of befriend and befraud, or be trapped on the wrong side of the universe forever—several million lightyears from the nearest deli.
CG Volars is a 3rd generation Mexican-American author and wickedly sarcastic English teacher. A National Hispanic Scholar from the University of Alabama, she was born in Texas where her love for outlandish characters and subversive literature first took hold. CG has lived in 3 countries, 4 states, survived a Category 5 hurricane, and is proudly banned for life from the Vatican. She currently resides in Northern California with her husband, daughters, and two grey cats—Skittles and Rosie. When not writing, she howls at high schoolers to read, gardens poorly, and collects hat pins.