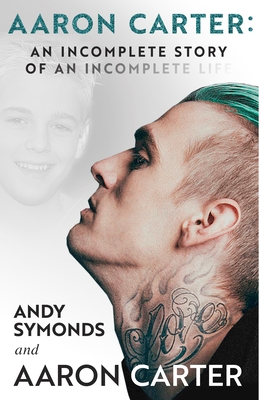 Aaron Carter was working on a book about his life before his death. He never had a chance to finish it. This is what was completed.

All Aaron Carter knew was fame. He released his first album at the age of nine and was a 3x platinum artist selling out stadiums before reaching his teenage years. Close friend and mentor Michael Jackson confided in him that he believed Aaron was the King of Pop's heir apparent. His brother was in the biggest boy band in the world. Aaron Carter's destiny was of stardom; and unfortunately, tragedy, with his life ending on Nov. 5, 2022.

Aaron spent three years working off and on with writer Andy Symonds (My Father's Son, The Man in the Arena, Reality Check) on this book. In it, Aaron tells about the night he spent at Michael Jackson's Neverland Ranch, awakening in the middle of the night to find Michael crouched on the end of his bed. He talks about his relationship with his family, how his parents stole his money, and what it was like growing up in the shadow of Nick and the Backstreet Boys. He details performing with Michael Jackson at Madison Square Garden on Sept. 10, 2001, and being on his way to the airport to board Michael's private jet when he watched the first plane hit the World Trade Center.

Aaron is honest, funny, irreverent and self-aware with amazing recall about the stories that shaped a childhood star into a troubled, but talented adult.

This book is not completed, but now it never will be. In its final version as published, notes are left in the manuscript by Aaron's writer and publisher so the reader can see the focus and direction where the book were going.

Aaron was an open book during the process--it's a tragic irony that his autobiography will never include all his stories, thoughts, hopes and dreams as he intended.