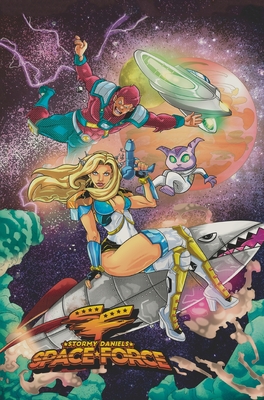 Captain Stormy Daniels commands the U.R.E. Helix, a starship serving the United Republic of Earth and its leader, "very stable genius" OrDon. Daniels and her crew - capitalists at heart - are for hire, too. Its Barbarella meets Star Trek meets Stripperalla in a racy comedy and action and adventure series starring adult film sensation Stormy Daniels.

The Helix is ordered to rescue the egotistical General Brock and the beautiful Captain Grant from the clutches of the maniacal Red Queen. The queen is holding a scientist responsible for the creation of a devastating weapon capable of destroying the Earth. Only Captain Stormy Daniels, her second-in-command, Dax, her droids, and the mysterious alien, Munch, can save the Earth