What Is a Woman?: One Man's Journey to Answer the Question of a Generation (Hardcover) 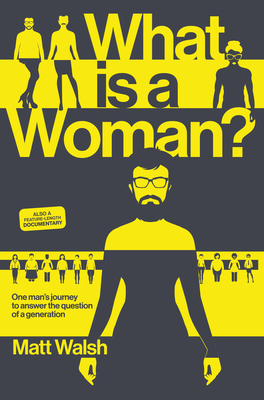 What Is a Woman?: One Man's Journey to Answer the Question of a Generation (Hardcover)

Is this even a question?

What is a woman?

But all of a sudden, way too many people don't seem to know the answer. Is a woman a woman just by feeling or acting a particular way? Aren't gender roles just a "social construct"? Can a woman be "trapped in a man's body"? Does being a woman mean anything at all?

We used to think being a woman had something to do with biology, but the nation's top experts keep assuring us that is definitely not the case. So Matt decided to do what no man (whatever that means) had done before. He sat down with the experts and asked them directly.

In What Is a Woman?, our hero:

- Uncovers the shocking and horrifying roots of radical gender ideology

Join Matt on his often comical, yet deeply disturbing, journey as he answers the question generations before us never knew they needed to ask: What is a woman?

Matt Walsh is a bestselling author, popular speaker, and conservative political commentator. Walsh began his career as a radio host and quickly become an influential writer among well-known conservative voices. Now, he is the host of The Daily Wire's The Matt Walsh Show, where he discusses cultural, religious, and political issues in a way that connects with all generations. Matt lives in Nashville, Tennessee, with his wife and young children.