Dispatches from the Cowgirl: Through the Looking Glass with a Navy Diplomat's Wife (Hardcover) 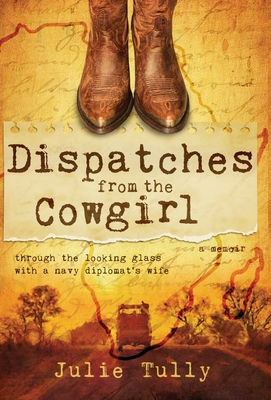 Dispatches from the Cowgirl: Through the Looking Glass with a Navy Diplomat's Wife (Hardcover)

Would you move to Africa? For Julie Tully, a cowgirl who married a United States naval officer, the answer was a no-brainer: Yes

Leaving her career and everything she knew behind to follow her husband, Julie was rapidly approaching forty and wondering, "What is my place in the world?" Enter Africa, the continent she had dreamed of since childhood, a chance to reinvigorate her life. A supposed two-year assignment for her family in Sub-Saharan Africa soon turns into an eight-year adventure in Cameroon, Nigeria, and Djibouti and sees Julie become an unofficial diplomat as wife to a military attach . In a world where diplomacy is key, Julie becomes the person she was meant to be.

Julie's memoir is a real-life Alice in Wonderland tale. A cowgirl falls into Africa like Alice fell into Wonderland, taking you on a voyage of discovery and into the little-known world of an American military spouse serving amongst the world's diplomatic corps. One moment, you'll laugh out loud as Julie takes her first step onto the African continent and begins setting up their home in Cameroon. The next, you'll gasp in shock as a terrorist bomb shakes their house in Nigeria.

Part travelogue, and part midlife coming-of-age story, Dispatches from the Cowgirl takes you to the Africa that Julie experienced. Complete with all its beauty and flaws, it's the Africa that continues to capture the attention of the world's military powers and the Africa she struggled to say goodbye to.