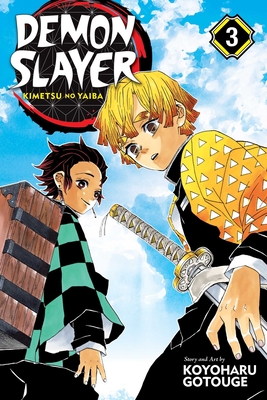 This is book number 3 in the Demon Slayer: Kimetsu no Yaiba series.

Tanjiro sets out on the path of the Demon Slayer to save his sister and avenge his family!

In Taisho-era Japan, kindhearted Tanjiro Kamado makes a living selling charcoal. But his peaceful life is shattered when a demon slaughters his entire family. His little sister Nezuko is the only survivor, but she has been transformed into a demon herself! Tanjiro sets out on a dangerous journey to find a way to return his sister to normal and destroy the demon who ruined his life.

Tanjiro and Nezuko cross paths with two powerful demons who fight with magical weapons. Even help from Tamayo and Yushiro may not be enough to defeat these demons who claim to belong to the Twelve Kizuki that directly serve Kibutsuji, the demon responsible for all of Tanjiro’s woes! But if these demons can be defeated, what secrets can they reveal about Kibutsuji?