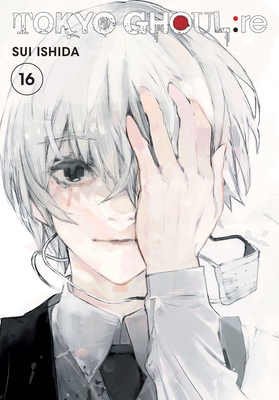 This is book number 16 in the Tokyo Ghoul: re series.

The Ghoul–CCG alliance secures its first victory when it rescues Kaneki from the monster he was entombed within. But the creature still poses a dire threat to the city as it continues to birth mutant Ghouls, some of which are infecting humans with a horrific form of Ghoulism! The only cure lies deep in the belly of the beast itself, and Kaneki is determined to find it. But will this act of bravery be the final strike to end the war or Kaneki’s last stand?!
Sui Ishida was born in Fukuoka, Japan. He is the author of Tokyo Ghoul and several Tokyo Ghoul one-shots, including one that won him second place in the Weekly Young Jump 113th Grand Prix award in 2010. Tokyo Ghoul began serialization in Weekly Young Jump in 2011 and was adapted into an anime series in 2014.