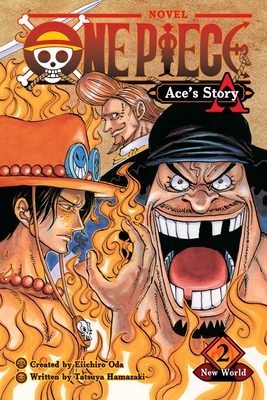 This is book number 2 in the One Piece Novels series.

Adventure on the high seas continue in these stories featuring the characters of One Piece!

Get the backstory on Luffy’s brother Ace! Contains the origin story of Luffy’s adopted brother Ace, and tales of his thrilling quest for the legendary One Piece treasure.

After an undersea tangle with mermaids and fish-men, Portgaz D. Ace leads his Spade Pirates crew to the New World, a place where pirate masters and rookies battle for territory and treasure. As he flees memories of his secret past, Ace seeks pirating infamy so powerful it will change the world order. To achieve this goal, he sets his sights on one of the strongest fleets in the ocean—the Whitebeard Pirates, ruled over by dread pirate Whitebeard, the strongest man in the world!
Eiichiro Oda began his manga career at the age of 17, when his one-shot cowboy manga Wanted! won second place in the coveted Tezuka manga awards. Oda went on to work as an assistant to some of the biggest manga artists in the industry, including Nobuhiro Watsuki, before winning the Hop Step Award for new artists. His pirate adventure One Piece, which debuted in Weekly Shonen Jump magazine in 1997, quickly became one of the most popular manga in Japan.