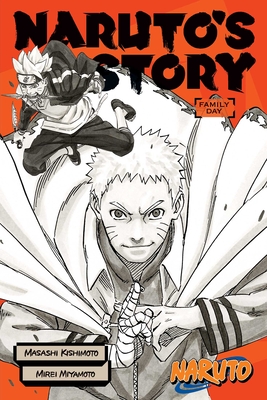 A new series of prose novels, straight from the worldwide Naruto franchise. Naruto’s allies and enemies take center stage in these fast-paced adventures, with each volume focusing on a particular clan mate, ally, team—or villain.

To celebrate Family Day, Konohagakure's new holiday, Naruto and his daughter, Himawari, are on the hunt for an elusive must-have item. Hinata wants to make the day memorable for her family, and even Sasuke makes special time with his daughter, Sarada, and his wife, Sakura! At the end of the day, will Family Day be a success?
Author/artist Masashi Kishimoto was born in 1974 in rural Okayama Prefecture, Japan. After spending time in art college, he won the Hop Step Award for new manga artists with his manga Karakuri (Mechanism). Kishimoto decided to base is next story on traditional Japanese culture. His first version of Naruto, drawn in 1997, was a one-shot story about fox spirits; his final version, which debuted in Weekly Shonen Jump in 1999, quickly became the most popular ninja manga in Japan.

Under the name Zoncho, Mirei Miyamoto won the Jump Novel Grand Prix Summer ’14 in the character novel division. His work includes Marunouchi of the Dead and Tagayasu Zombie-sama, and he is always pushing himself in new directions of storytelling, such as with his contribution to Thus Spoke Kishibe Rohan: A Short Story Collection.