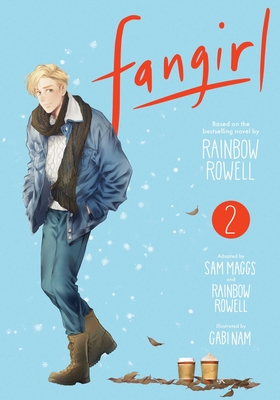 This is book number 2 in the Fangirl series.

The manga adaptation of the beloved novel featuring all-new scenes by Rainbow Rowell!

Cath just wants to hang out with her twin sister and write fanfiction. But now that they’re in college, her sister doesn’t have time for her. And life keeps pulling Cath further and further out of her shell. For the first time ever, Cath has her own social circle. There’s Nick, her handsome classmate who wants her to write short stories with him… And then Levi, who keeps showing up when she isn’t looking for him…

Actually…maybe Cath’s circle is more of a triangle?
Rainbow Rowell lives in Omaha, Nebraska, with her family. She is the #1 New York Times bestselling author of Attachments, Eleanor & Park, Landline, and the Simon Snow Trilogy. Her comics credits include Marvel’s Runaways and She-Hulk, and the graphic novel Pumpkinheads.

Sam Maggs is a bestselling author of books, comics, and video games. She’s been a senior games writer, including work on Marvel’s Spider-Man; the author of many YA and middle-grade books like The Unstoppable Wasp, Con Quest!, Tell No Tales, and The Fangirl’s Guide to the Galaxy; and a comics writer for beloved titles like Marvel Action: Captain Marvel, My Little Pony, and Transformers.

Gabi Nam is a South Korean artist who has lived abroad in Japan and France. She self‑publishes her work in South Korea and specializes in the black‑and‑white manga style. Fangirl: The Manga is her English debut.