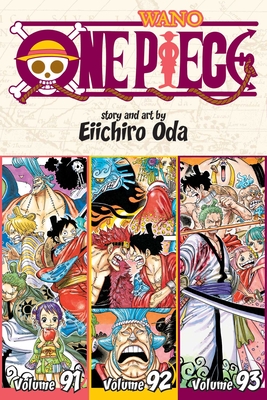 This is book number 31 in the One Piece (Omnibus Edition) series.

ADVENTURE IN THE LAND OF WANO

Luffy’s just landed in Wano and he’s already lost his crew! An isolated country of samurai with mysterious customs, Wano’s ruled over by Kaido, captain of the Beast Pirates, known as the strongest creature in the world. Naturally, Luffy picks a fight with him—but without his Straw Hat Crew to back him up, will the rubber wonder make it out alive?
Eiichiro Oda began his manga career at the age of 17, when his one-shot cowboy manga Wanted! won second place in the coveted Tezuka manga awards. Oda went on to work as an assistant to some of the biggest manga artists in the industry, including Nobuhiro Watsuki, before winning the Hop Step Award for new artists. His pirate adventure One Piece, which debuted in Weekly Shonen Jump magazine in 1997, quickly became one of the most popular manga in Japan.