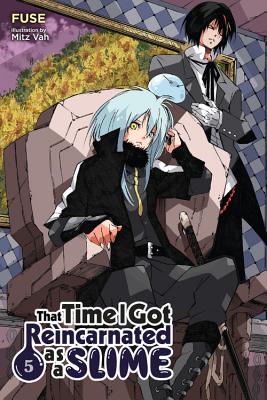 This is book number 5 in the That Time I Got Reincarnated as a Slime (light novel) series.

WHEN IT RAINS, IT POURS!
Despite Rimuru's absence, things seem to be proceeding fairly smoothly in the newborn nation of Tempest. But there's trouble brewing elsewhere: The nearby Kingdom of Farmus's top brass are planning an invasion of Tempest, and at the same time, Rimuru's demon lord friend Milim Nava has declared war on Tempest's ally, the Beast Kingdom of Eurazania. As if things couldn't get any worse, all communication between Rimuru and his crew back home has suddenly gone silent in their hour of need! Tempest may be in for some hard times ahead-but this steadfast slime isn't throwing in the towel just yet. He has a plan...and it's downright demonic!
Mitz Vah is the artist for That Time I Got Reincarnated as a Slime.

Fuse is the author of That Time I Got Reincarnated as a Slime.