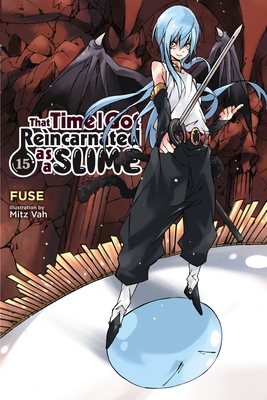 This is book number 15 in the That Time I Got Reincarnated as a Slime (light novel) series.

Following a fierce battle against his sister Velgrynd, Rimuru’s steadfast ally Veldora has fallen into the enemy’s clutches. An enraged Rimuru gives the order to massacre his foes, a request his Tempest top brass couldn’t be more thrilled to oblige. Once Rimuru’s demon underlings evolve en masse, the final battle between Tempest and the Eastern Empire will begin in earnest. But if Rimuru wants to save Veldora, he’ll need to undergo an evolution of his own. It’s time to unleash the power he’s been holding back!
Fuse is the author of That Time I Got Reincarnated as a Slime.
Mitz Vah is the artist for That Time I Got Reincarnated as a Slime.