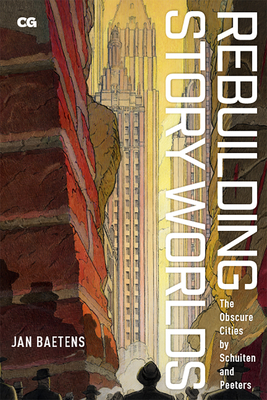 
Special Order—Subject to Availability
A collaboration between Belgian artist François Schuiten and French writer Benoît Peeters, The Obscure Cities is one of the few comics series to achieve massive popularity while remaining highly experimental in form and content. Set in a parallel world, full of architecturally distinctive city-states, The Obscure Cities also represents one of the most impressive pieces of world-building in any form of literature.

Rebuilding Story Worlds offers the first full-length study of this seminal series, exploring both the artistic traditions from which it emerges and the innovative ways it plays with genre, gender, and urban space. Comics scholar Jan Baetens examines how Schuiten’s work as an architectural designer informs the series’ concerns with the preservation of historic buildings. He also includes an original interview with Peeters, which reveals how poststructuralist critical theory influenced their construction of a rhizomatic fictional world, one which has made space for fan contributions through the Alta Plana website.

Synthesizing cutting-edge approaches from both literary and visual studies, Rebuilding Story Worlds will give readers a new appreciation for both the aesthetic ingenuity of The Obscure Cities and its nuanced conception of politics.

JAN BAETENS is a professor of cultural studies at the University of Leuven in Flanders, Belgium. His recent books on comics and visual studies include The Graphic Novel, coauthored with Hugo Frey, The Cambridge History of the Graphic Novel, coedited with Frey and Steve Tabachnick, Novelization: From Film to Novel and The Film Photonovel: A Cultural History of Forgotten Adaptations.

"In this compelling study of world making and storytelling in The Obscure Cities by François Schuiten and Benoît Peeters, Jan Baetens offers a subtle and intelligent reading of how structures of authorship, character, image, and world draw readers into a truly fictional universe in which interpretation and rereading are key. With this book, Baetens has certainly brought The Obscure Cities into its rightful place in the history of American and European comics."
— Nancy Pedri

"Baetens ‘monograph is devoted to the overall concept of a series that was not originally conceived as such. The heterogeneity of the individual, complementary and contradicting volumes that stand for themselves and can be read in the context of the other volumes."
— Comic.de