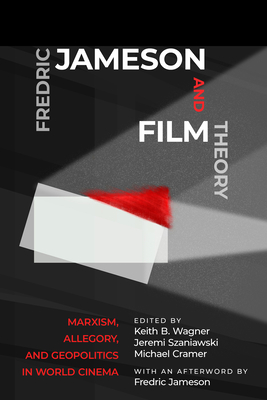 
Not On Our Shelves—Ships in 1-5 Days
Frederic Jameson and Film Theory is the first collection of its kind, it assesses and critically responds to Fredric Jameson’s remarkable contribution to film theory. The essays assembled explore key Jamesonian concepts—such as totality, national allegory, geopolitics, globalization, representation, and pastiche—and his historical schema of realism, modernism, and postmodernism, considering, in both cases, how these can be applied, revised, expanded and challenged within film studies. Featuring essays by leading and emerging voices in the field, the volume probes the contours and complexities of neoliberal capitalism across the globe and explores world cinema's situation within these forces by deploying and adapting Jamesonian concepts, and placing them in dialogue with other theoretical paradigms. The result is an innovative and rigorously analytical effort that offers a range of Marxist-inspired approaches towards cinemas from Asia, Latin America, Europe, and North America in the spirit of Jameson's famous rallying cry: 'always historicize!'.
KEITH B. WAGNER is an assistant professor of global media and culture and director of doctoral research in film and media studies at University College London in the United Kingdom. He is the coeditor of Neoliberalism and Global Cinema: Capital, Culture and Marxist Critique.

JEREMI SZANIAWSKI is an assistant professor of film studies and comparative literature, and the Amesbury Professor of Polish language and culture at the University of Massachusetts at Amherst. He is the author of The Cinema of Alexander Sokurov: Figures of Paradox.

MICHAEL CRAMER is a professor of cinema studies at Sarah Lawrence College in Bronxville, New York. He is the author of Utopian Television: Roberto Rossellini, Peter Watkins, and Jean-Luc Godard Beyond Cinema.
"This exciting volume explicates the Jamesonian project while also extending and—sometimes—taking issue with it. It will be regarded as a major landmark in film studies."
— Carl Freedman

"This collection offers a thoughtful reckoning with the impact of Jameson's work on film studies to date while also charting a critical agenda for a Jamesonian film studies to come. Drawing on an international range of scholars Fredric Jameson and Film Theory answers Jameson's call to map the relation of individual films to the world-system of capitalism, illuminating along the way exciting new avenues for film theory and criticism."
— Derek Nystrom

"The excellent essays collected here revisit some of Jameson’s explicit filmic engagements before scaling out to explore the wider utility of Jamesonian theoretical models in contexts that he did not necessarily address. In so doing, Fredric Jameson and Film Theory exemplifies one of its central claims, the importance of Jameson’s work for thinking about the 'global turn' in film studies."
— Joseph Jonghyun Jeon