Checkpoint Charlie: The Cold War, The Berlin Wall, and the Most Dangerous Place On Earth (Hardcover) 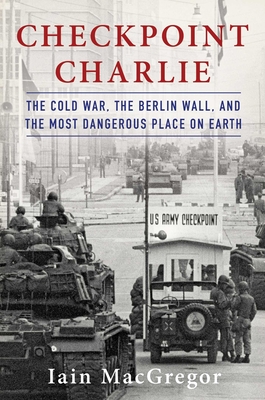 Checkpoint Charlie: The Cold War, The Berlin Wall, and the Most Dangerous Place On Earth (Hardcover)


Not On Our Shelves—Ships in 1-5 Days
A “constantly captivating…well-researched and often moving” (The Wall Street Journal) history of Checkpoint Charlie, the famous military gate on the border of East and West Berlin where the United States confronted the USSR during the Cold War.

In the early 1960s, East Germany committed a billion dollars to the creation of the Berlin Wall, an eleven-foot-high barrier that consisted of seventy-nine miles of fencing, 300 watchtowers, 250 guard dog runs, twenty bunkers, and was operated around the clock by guards who shot to kill. Over the next twenty-eight years, at least five thousand people attempt to smash through it, swim across it, tunnel under it, or fly over it.

In 1989, the East German leadership buckled in the face of a civil revolt that culminated in half a million East Berliners demanding an end to the ban on free movement. The world’s media flocked to capture the moment which, perhaps more than any other, signaled the end of the Cold War. Checkpoint Charlie had been the epicenter of global conflict for nearly three decades.

Now, “in capturing the essence of the old Cold War [MacGregor] may just have helped us to understand a bit more about the new one” (The Times, London)—the mistrust, oppression, paranoia, and fear that gripped the world throughout this period. Checkpoint Charlie is about the nerve-wracking confrontation between the West and USSR, highlighting such important global figures as Eisenhower, Stalin, JFK, Nikita Khrushchev, Mao Zedung, Nixon, Reagan, and other politicians of the period. He also includes never-before-heard interviews with the men who built and dismantled the Wall; children who crossed it; relatives and friends who lost loved ones trying to escape over it; military policemen and soldiers who guarded the checkpoints; CIA, MI6, and Stasi operatives who oversaw operations across its borders; politicians whose ambitions shaped it; journalists who recorded its story; and many more whose living memories contributed to the full story of Checkpoint Charlie.
Iain MacGregor has been an editor and publisher of nonfiction for over twenty-five years. He is the author of The Lighthouse of Stalingrad and Checkpoint Charlie. As a history student he visited the Baltic and the Soviet Union in the early 1980s and has been captivated by Soviet history ever since. He has published books on every aspect of the Second World War on the Eastern Front 1941-45 and has visited archives in Leningrad, Moscow, and Volgograd. He is a Fellow of the Royal Historical Society and his writing has appeared in the Guardian, the Spectator and BBC History Magazine. He lives with his wife and two children in London.
“One of the many strengths of this fluid and constantly captivating book is the wonderful range of voices that Mr. MacGregor, a British editor and publisher, has brought together… well-researched and often moving.” —The Wall Street Journal

“MacGregor brings the wall back to life through interviews with the people who built, defended and lived with it.” —Washington Post, “Books to Read in November”

“A fascinating and telling reminder of what was perhaps the most potent symbol of the Cold War….MacGregor writes with great fluency and narrative drive.” —William Boyd, NewStatesman

“As an aspiring student of modern history in the 1980s, my thinking was dominated by the Berlin Wall and the monstrous regime at its heart. It is difficult to believe now—much like the Cold War itself—that we all thought the Wall was so immortal. As a writer of oral history, I look forward to MacGregor bringing the stories of the people who populated this barrier to life. We need to remember.” —Joshua Levine, New York Times bestselling author of Dunkirk

“A lively, evocative account of the life and death of the world's most notorious wall. In capturing the essence of the old Cold War he may just have helped us to understand a bit more about the new one.” —The Times

“MacGregor compellingly portrays Berlin’s overarching geo-political story, and brings it alive through the personal experiences of the individuals at its heart.” —Jonathan Fenby, author of The General

“A wonderful approach to the history of the Cold War, tackling the complex legacy of the Berlin Wall through the men and women who lived in its shadow. Weaving together personal testimonies, this book will offer a valuable insight into history as it was lived, and shine an illuminating new light on an icon of the twentieth century.” —Duncan Barrett, New York Times bestselling author of GI Brides

“Checkpoint Charlie is emblematic of both the tension and romance of the pivot between third World War and peace. Ian MacGregor captures brilliantly and comprehensively both the danger and exhilaration that I and other reporters, soldiers, and people experienced intersecting with the wall, and the fears and the eventual hope that flowed through it. A must read for anyone who wants to understand the Europe we have inherited.” —Jon Snow, Channel 4 News

“This remarkable book about the Berlin Wall, which has been the subject of everything from diplomatic histories to spy thrillers, is different. Based on extensive, detailed interviews with people on both sides of the wall—soldiers and civilians, Communists and anti-Communists, spies, intellectuals and ordinary citizens—it offers a riveting panorama of everyday life as it was actually lived at ground zero of the cold war.” —William Taubman, Pulitzer Prize-winning author of Krushchev: The Man and His Era

“The  story of divided Berlin has been told so often that there seemed little new to say about it. Iain MacGregor's book, with its wealth of eye witness stories, proves how wrong that was - and how understanding the last Cold War is crucial for anyone who wants to understand the new one.” —Martin Sixsmith, ex-BBC News Moscow Correspondent