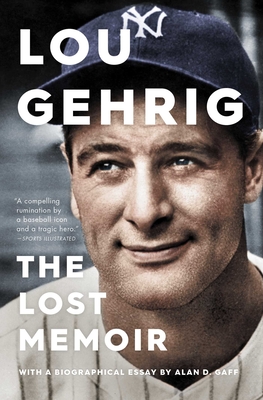 
Not On Our Shelves—Ships in 1-5 Days
The lost memoir from Lou Gehrig—“a compelling rumination by a baseball icon and a tragic hero” (Sports Illustrated) and “a fitting tribute to an inspiring baseball legend” (Publishers Weekly).

At the tender age of twenty-four, Lou Gehrig decided to tell the remarkable story of his life and career. He was one of the most famous athletes in the country, in the midst of a record-breaking season with the legendary 1927 World Series–winning Yankees. In an effort to grow Lou’s star, pioneering sports agent Christy Walsh arranged for Lou’s tale of baseball greatness to syndicate in newspapers across the country. Those columns were largely forgotten and lost to history—until now.

Lou comes alive in this “must-read” (Tyler Kepner, The New York Times) memoir. It is an inspiring, heartfelt rags-to-riches tale about a poor kid from New York who became one of the most revered baseball players of all time.

Fourteen years after his account, Lou would tragically die from ALS, a neuromuscular disorder now known as Lou Gherig’s Disease. His poignant autobiography is followed by an insightful biographical essay by historian Alan D. Gaff. Here is Lou—Hall of Famer, All Star, MVP, an “athlete who epitomized the American dream” (Christian Science Monitor)—back at bat.
Alan D. Gaff is an independent scholar and the author of many books, including Lou Gehrig: The Lost Memoir, Bayonets in the Wilderness, Blood in the Argonne, and On Many a Bloody Field, hailed as “a masterpiece of Civil War scholarship” (The Bookwatch). He lives in Indiana.
"Alan Gaff’s slim but distinctive contribution to the Gehrig syllabus shifts our attention to the Hall of Famer’s improbable rise—in its way, every bit as inspiring as the courage he demonstrated later."
—The Wall Street Journal

“A fitting tribute to an inspiring baseball legend.”
—Publishers Weekly

“It is a special treat to add Lou Gehrig: The Lost Memoir, to the canon of such a profound American life. What a treasure to hear from Gehrig at the height of his powers, blissfully unaware of the hardship he would face. Gehrig offers fascinating first-hand insight into his life and the world of baseball in the 1920s, and Alan D. Gaff follows with a captivating essay giving readers the full scope of the man. This book is a must read for anyone interested in a fresh perspective from a true legend in his prime.”
—Tyler Kepner, national baseball writer for The New York Times, bestselling author of K: A History of Baseball in Ten Pitches

“Lost no more, Lou Gehrig: The Lost Memoir is a remarkable find—and brings the Iron Horse to life in a new, compelling way. Gehrig is one of the essential figures in American sport and this is an essential addition to his story.”
—Jeremy Schaap, host of ESPN’s E:60 and Outside the Lines

"A compelling rumination by a baseball icon and a tragic hero."
—Sports Illustrated

"Gehrig reveals a great deal about himself and his insecurities, both in his youth and in his years in professional baseball...The Yankee first baseman has very interesting observations and comments on his teammates and opponents...A delight to read."
—New York Journal of Books

"Gaff astutely crafts a biography to accompany Gehrig’s columns and focuses on details that parallel Gehrig’s generosity of spirit. Perhaps most movingly, Gaff revisits the Yankee great’s post-baseball career. Despite the ravages of ALS, Gehrig worked for the parole board, counseling young men who had taken a wrong turn in life. 'Even when he could barely sit in his office chair, he came to work everyday,' Gaff writes of Gehrig.”
—Associated Press

"These long-lost columns serve both as a time capsule into a past era of baseball and a window into the life of an athlete who epitomized the American dream."
—Christian Science Monitor

“Revealing insights into Gehrig's view of his role on the Yankees and his feelings about fame...Baseball fans with an interest in the game’s history will find much to enjoy here.”
—Booklist

“A new book that is an essential addition to [Lou Gehrig’s] story.”
—ESPN Radio's The Sporting Life with Jeremy Schaap