Back to the Prairie: A Home Remade, A Life Rediscovered (Hardcover) 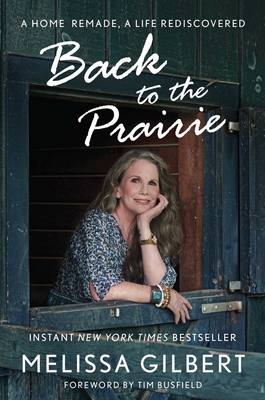 Back to the Prairie: A Home Remade, A Life Rediscovered (Hardcover)


Not On Our Shelves—Ships in 1-5 Days
The New York Times bestselling author and star of Little House on the Prairie returns with a hilarious and heartfelt memoir chronicling her journey from Hollywood to a ramshackle house in the Catskills during the COVID-19 pandemic.

Known for her childhood role as Laura Ingalls Wilder on the classic NBC show Little House on the Prairie, Melissa Gilbert has spent nearly her entire life in Hollywood. From Dancing with the Stars to a turn in politics, she was always on the lookout for her next project. She just had no idea that her latest one would be completely life changing.

When her husband introduces her to the wilds of rural Michigan, Melissa begins to fall back in love with nature. And when work takes them to New York, they find a rustic cottage in the Catskill Mountains to call home. But “rustic” is a generous description for the state of the house, requiring a lot of blood, sweat, and tears for the newlyweds to make habitable.

When the pandemic descends on the world, it further nudges Melissa out of the spotlight and into the woods. She trades Botox treatments for DIY projects, power lunching for gardening and raising chickens, and soon her life is rediscovered anew in her own little house in the Catskills.
Melissa Gilbert starred as Laura Ingalls Wilder on the hit NBC television show Little House on the Prairie. She has starred in numerous movies and plays and served two terms as president of the Screen Actors Guild. She is the author of Prairie Tale, Daisy and Josephine, My Prairie Cookbook, and Back to the Prairie. She resides in the Catskills and New York City with her husband, Timothy Busfield.