The Great Displacement: Climate Change and the Next American Migration (Hardcover) 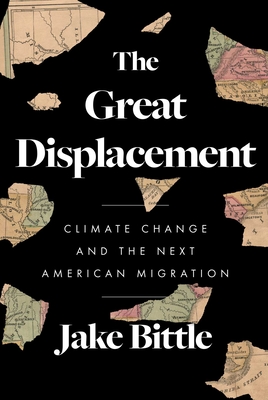 The Great Displacement: Climate Change and the Next American Migration (Hardcover)

The untold story of climate migration in the United States—the personal stories of those experiencing displacement, the portraits of communities being torn apart by disaster, and the implications for all of us as we confront a changing future.

Even as climate change dominates the headlines, many of us still think about it in the future tense—we imagine that as global warming gets worse over the coming decades, millions of people will scatter around the world fleeing famine and rising seas. What we often don’t realize is that the consequences of climate change are already visible, right here in the United States. In communities across the country, climate disasters are pushing thousands of people away from their homes.

A human-centered narrative with national scope, The Great Displacement is “a vivid tour of the new human geography just coming into view” (David Wallace-Wells, New York Times bestselling author of The Uninhabitable Earth). From half-drowned Louisiana to fire-scorched California, from the dried-up cotton fields of Arizona to the soaked watersheds of inland North Carolina, people are moving. In the last few decades, the federal government has moved tens of thousands of families away from flood zones, and tens of thousands more have moved of their own accord in the aftermath of natural disasters. Insurance and mortgage markets are already shifting to reflect mounting climate risk, pricing people out of risky areas.

Over the next fifty years, millions of Americans will be caught up in this churn of displacement, forced inland and northward in what will be the largest migration in our country’s history. The Great Displacement compassionately tells the stories of those who are already experiencing life on the move, while detailing just how radically climate change will transform our lives—erasing historic towns and villages, pushing people toward new areas, and reshaping the geography of the United States.
Jake Bittle is a journalist based in Brooklyn who covers climate change and energy. His work has appeared in The New York Times, The Guardian, Harper’s Magazine, and a number of other publications. He is also a contributing writer for Grist.
“We know what climate change will do, now, if not precisely its scale. But we don't yet see clearly just what it will do to us—our families and communities and homesteads, not mention our politics and culture. Jake Bittle's The Great Displacement is a bracing, vivid tour of the new human geography just coming into view and warning us of what's to come.”
—David Wallace-Wells, New York Times bestselling author of The Uninhabitable Earth

"Jake Bittle travels from Florida to California to see how climate change is already altering people's lives. The Great Displacement is closely observed, compassionate, and far-sighted."
—Elizabeth Kolbert, Pulitzer-Prize winning author of Under a White Sky

"It's hard to imagine a more timely book—as climate chaos gathers momentum, more and more people are forced to make the hardest of human decisions: to leave home and make a new life elsewhere. This deeply-reported account brings those stories to life, and with them a host of policy choices that could make this new era a little less disastrous."
—Bill McKibben, author Falter: Has the Human Game Begun to Play Itself Out?

“Jake Bittle draws close to those communities that are being fundamentally reshaped by climate change and he sticks around, long after the disaster declarations are over, to ask one of our era's most pressing questions: when we are forced to leave the places that have long defined us, what will we encounter on the other side?”
—Elizabeth Rush, author of Rising: Dispatches from the New American Shore

"Until now, the word 'displaced,' has never been strong enough to accurately conjure up what it really means: people driven from their homes, but not out of their countries, by the disruptive forces of climate-driven disasters. America already has millions of such people. We can't call them 'refugees' because they're still here in America. Jake Bittle has found a way to bring us their individual accounts to tell the larger story of a failing system—extreme weather, government error and inaction, and corporate and individual greed have come together to drive an unfolding catastrophe, which already impacts us all."
—Eliza Griswold, Pulitzer Prize-winning author of Amity and Prosperity

“The foregrounding of individual voices adds to the book’s power and sense of urgency, and Bittle is an expert explainer of policy matters…A captivating look at a pressing issue.”
—Publishers Weekly, starred review

“Bittle provides vivid descriptions and accessible technical explanations, but the most powerful parts of his narrative detail the lives of the individuals...He poses disturbing questions: where are all these uprooted people supposed to go?...Powerful and moving.”
—Booklist, starred review