Tasting History: Explore the Past through 4,000 Years of Recipes (A Cookbook) (Hardcover) 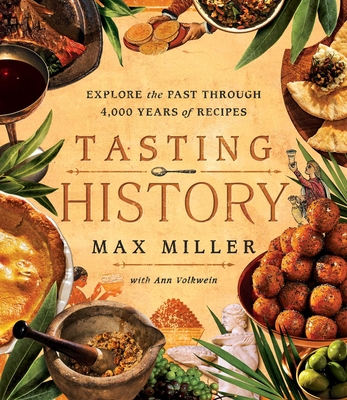 Tasting History: Explore the Past through 4,000 Years of Recipes (A Cookbook) (Hardcover)

What began as a passion project when Max Miller was furloughed during Covid-19 has become a viral YouTube sensation with a million followers amassed in just two years. The Tasting History with Max Miller channel has thrilled food enthusiasts and history buffs alike as Miller recreates a dish from the past, often using historical recipes from vintage texts, but updated for modern kitchens as he tells stories behind the cuisine and culture. From ancient Rome to Ming China to medieval Europe and beyond, Miller has collected the best-loved recipes from around the world and has shared them with his fans. Now, with beautiful photographs portraying the dishes and historical artwork throughout, Tasting History compiles over sixty dishes such as:
-Tuh’u: a red beet stew with leeks dating back to 1740 BC
-Globi: deep-fried cheese balls with honey and poppy seeds
-Soul Cakes: yeasted buns with currants from circa 1600
-Pumpkin Tourte: a crustless pumpkin cheesecake with cinnamon and sugar on top from 1570
-And much more.

Including the original recipe and Miller’s modern recreation, this cookbook is a must-have for any avid cook or history fan looking to experience delicious recipes from the past.
Max Miller is the creator and host of the viral digital series Tasting History with Max Miller on YouTube. Prior to his YouTube stardom, Max was an employee of Walt Disney Studios in the marketing and film distribution departments. When the COVID-19 stay-at-home order went into effect in Los Angeles, Max was furloughed and began turning his passion for historic dishes into a self-taped video series. Within weeks of his first video on YouTube, Max’s channel and videos reached hundreds of thousands of viewers who wanted to learn more about historic dishes. Max’s channel has been covered in outlets like America’s Test Kitchen, ABC’s Localish, Chowhound, Foodsided, GLAAD, KTLA Morning News, A Hot Dog Is a Sandwich podcast, PopCulture, Rachael Ray, Today, UPROXX, and Yahoo!. Max currently resides in Los Angeles, California, with his husband, José, and their two cats.
"Throughout, Miller skillfully balances history with tantalizing recipes, and manages to make even ancient fare accessible with suggested ingredient substitutions and an inviting tone. The result is a fascinating outing that will entice history buffs and home cooks alike." — Publishers Weekly