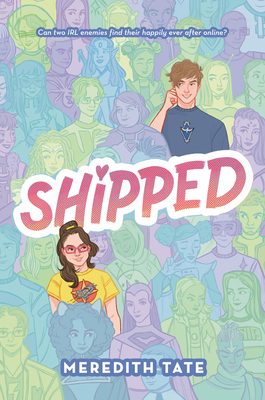 
Special Order—Subject to Availability
Can two IRL enemies find their happily ever after online?

Stella Greene and Wesley Clarke are Gene Connolly Memorial High School's biggest rivals. While the two have been battling it out for top student, it's a race to the bottom when it comes to snide comments and pulling the dirtiest prank. For years, Stella and Wes have been the villain in each other's story, and now it's all-out war.

And there is no bigger battle than the one for valedictorian, and more specifically, the coveted valedictorian scholarship.

But Stella and Wes have more in common than they think. Both are huge fans of Warship Seven, a popular sci-fi TV drama with a dedicated online following, and the two start chatting under aliases--without a clue that their rival is just beyond the screen. They realize that they're both attending SciCon this year, so they plan to dress in their best cosplay and finally meet IRL.

While tensions at school are rising and SciCon inches closer and closer, the enemy lines between Stella and Wes blur when a class project shows them they might understand one another better than anyone else--and not just in cosplay.

From the author of The Last Confession of Autumn Casterly comes a heartfelt story about rivalry, friendships, and defying preconceived notions--even the ones about yourself.
Meredith Tate grew up in Concord, New Hampshire, where she fell in love with her two passions--writing and traveling. She earned her master's degree in social work from the University of New Hampshire and worked in Boston for several years before deciding to pursue her true dream of telling stories. After spending three wonderful years in St. Louis, Missouri, and three more amazing years in Zurich, Switzerland, Meredith now lives in Houston with her husband and her spoiled dog. When Meredith's not writing, she loves photography, playing the piano, trying new recipes, and chasing her goal of seeing every continent (four down, three to go!).
”A delicious and nerdy romance.” –Kirkus

"Stories rooted in fandom have been growing increasingly popular, and this rivals-to-allies romance embraces genre tropes while also challenging the assumptions its characters make at every turn. Great, competitive fun with satisfying payoff on every level." –Booklist