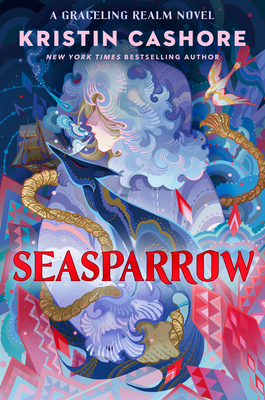 
On Our Shelves Now at:
Make the harrowing journey home with Queen Bitterblue's sister and spy, in the fifth novel in the bestselling Graceling Realm series.
Hava sails across the sea toward Monsea with her sister, the royal entourage, and the world’s only copies of the formulas for the zilfium weapon she saved at the end of Winterkeep. During the crossing, Hava makes an unexpected discovery about one of the ship’s crew, but before she can unravel the mystery, storms drive their ship off course, wrecking them in the ice far north of the Royal Continent. The survivors must endure a harrowing trek across the ice to make it back to Monsea. And while Queen Bitterblue grapples with how to carry the responsibility of a weapon that will change the world, Hava has a few more mysteries to solve—and a decision to make about who she wants to be in the new world Bitterblue will build.
Kristin Cashore grew up in northeast Pennsylvania and earned her master's degree from the Center for the Study of Children's Literature at Simmons College. She lives in the Boston area. Her epic fantasy novels set in the Graceling Realm--Graceling, Fire, Bitterblue, and Winterkeep--are all New York Times bestsellers and have won many awards.
"I may be biased, as Cashore has been my self-proclaimed favorite author for over a decade, but this book quite literally made me sob at my desk at one moment, so longtime (and newer-to-the-series) fans will be extremely thrilled."—BuzzFeed

"Seasparrow is a cathartic story, one that allows its heroine to understand how much she’s been through and how much she needs....I hope there’s more Hava yet to come."—Molly Templeton for Tor.com

"Cashore never shies away from showing the charming mundanities of the everyday and the brutal realities of the harshness of wilderness and emotions as well as exploring how enduring trauma shapes a person and a kingdom.... A harrowing, rewarding tale of survival."—Kirkus Reviews