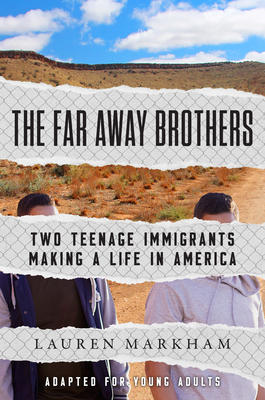 
Not On Our Shelves—Ships in 1-5 Days
The inspiring true story of identical twin teenage brothers who escape El Salvador's violence to build new lives in California as undocumented immigrants--perfect for fans of Enrique's Journey and anyone interested in learning about the issues that underlie today's conversations about DACA and immigration reform.

Ernesto and Raúl Flores are identical twins, used to being mistaken for each other. As seventeen-year-olds living in rural El Salvador, they are used to thinking that the United States is just a far-off dream. When Ernesto ends up on the wrong side of MS-13, one of El Salvador's brutal gangs, he flees the country for his own safety. Raúl, fearing that he will be mistaken for his brother, follows close behind.

Running from one danger to the next, the Flores twins make the harrowing journey north, only to fall into the hands of immigration authorities. When they finally make it to the custody of their older brother in Oakland, California, the difficulties don't end.

While navigating a new school in a new language, struggling to pay off their mounting coyote debt, and anxiously waiting for their day in immigration court, Raúl and Ernesto are also trying to lead normal teenage lives. With only each other for support, they begin the process of carving out a life for themselves, one full of hope and possibility.

Adapted for young adults from the award-winning adult edition, The Far Away Brothers is the inspiring true story of two teens making their way in America, a personal look at US immigration policy, and a powerful account of contemporary immigration.
Lauren Markham is a writer based in Berkeley, California, focusing on issues related to youth, migration, the environment, and her home state of California. Her work has appeared in outlets such as Harper's, the New Republic, Orion, the Guardian, the New York Times, and VQR, where she is a contributing editor. Lauren earned her MFA in fiction writing from Vermont College of Fine Arts. For over a decade, she has worked in the fields of refugee resettlement and immigrant education.

laurenmarkham.info
@LaurenMarkham_ on Twitter
@laurenemarkham on Instagram
"Never intrusive with her research, [Markham] keeps an eye on the family story while weaving in bits of history, geography, and politics. As a result, the fear and displacement the boys felt in California are both touching and educational. The informative afterword offers historical context and suggestions about what might be done to remedy the humanitarian crisis. Gets inside the heads and hearts of immigrants." —Kirkus Reviews, Starred

"Markham tells the story honestly and vividly, and while at times the book reads like fiction, she inserts her expertise as well as facts and data on the issue. Readers will get a very human glimpse into the lives of two immigrants while also learning more about the larger picture of immigration in the United States. A must for all young adult nonfiction shelves." —School Library Journal, Starred

"Markham has adapted her own book into a version for teens that loses none of the urgency or timeliness of the original. . . . The narrative includes accounts of economic policies that drive farmers into gangs, social policies that create animosity between people, and political policies that fuel anger and enable corporations to profit from vulnerability and loss. We learn how these policies affect real people, casting families into hopeless situations, debt, and separation. . . . Visceral and informative, this is a necessary read for today’s youth." —Booklist

Praise for the adult edition of The Far Away Brothers

"You should read The Far Away Brothers. We all should." --NPR