House of Salt and Sorrows (Paperback) 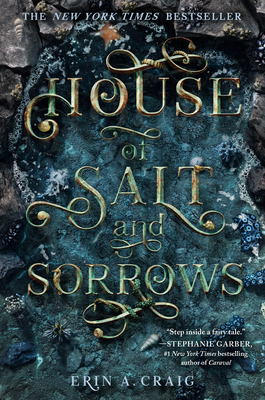 House of Salt and Sorrows (Paperback)

By Erin A. Craig

“Annaleigh is one of twelve sisters. Or she was. Mysterious and tragic circumstances are plaguing the Thaumus family, claiming the lives of the girls one at a time. Will Annaleigh be able to put a stop to it before she loses another beloved sister? Or will the curse come for her next? Equal parts gothic ghost story, tale of sea gods and legends, and The Twelve Dancing Princesses, Craig’s thrilling debut will sweep you into its pages and keep its claws latched on until the last page is turned.”
— Hana Boxberger, Village Books, Bellingham, WA

Get swept away by the New York Times bestseller that's sold almost 125,000 copies. As one by one her beautiful sisters mysteriously die on their isolated island estate, Annaleigh must unravel the curse that haunts her family.

“Nothing short of both haunting and mesmerizing . . . a perfect step into escapism and away from real life.”—Hypable


In a manor by the sea, twelve sisters are cursed.

Annaleigh lives a sheltered life at Highmoor with her sisters and their father and stepmother. Once there were twelve, but loneliness fills the grand halls now that four of the girls' lives have been cut short. Each death was more tragic than the last--the plague, a plummeting fall, a drowning, a slippery plunge--and there are whispers throughout the surrounding villages that the family is cursed by the gods.

Disturbed by a series of ghostly visions, Annaleigh becomes increasingly suspicious that her sister's deaths were no accidents. The girls have been sneaking out every night to attend glittering balls, dancing until dawn in silk gowns and shimmering slippers, and Annaleigh isn't sure whether to try to stop them or to join their forbidden trysts. Because who--or what--are they really dancing with?

When Annaleigh's involvement with a mysterious stranger who has secrets of his own intensifies, it's a race to unravel the darkness that has fallen over her family--before it claims her next. House of Salt and Sorrows is a spellbinding novel filled with magic and the rustle of gossamer skirts down long, dark hallways. Be careful who you dance with...

And don't miss Erin Craig's Small Favors, a mesmerizing and chilling novel about dark wishes and even darker dreams.

Erin A. Craig has always loved telling stories. After getting her BFA in Theatre Design and Production from the University of Michigan, she stage-managed tragic operas filled with hunchbacks, séances, and murderous clowns, then decided she wanted to write books that were just as spooky. An avid reader, an embroidery enthusiast, a rabid basketball fan, and a collector of typewriters, Erin makes her home in West Michigan with her husband and daughter. House of Salt and Sorrowsis her debut novel; her second novel, Small Favors, is on sale July 27.

erinacraig.com
@Penchant4Words on Twitter and Instagram
"It’s a fairy tale, a young-adult romance (though gothic enough for adult readers) and a whodunit too."—The Wall Street Journal

"An eerie, lovely Twelve Dancing Princesses retelling full of ghosts and gods and a fascinating waterfront world and I'm reading it from behind my fingers."—Melissa Albert, New York Times bestselling author of The Hazel Wood

"Chilling and atmospheric."—Laura E. Weymouth, author of The Light Between Worlds

"This moody maritime retelling of The Twelve Dancing Princesses blends elements of suspense and horror for a gothic twist on a familiar tale. A memorably built world populated with a hauntingly doomed family."—Booklist