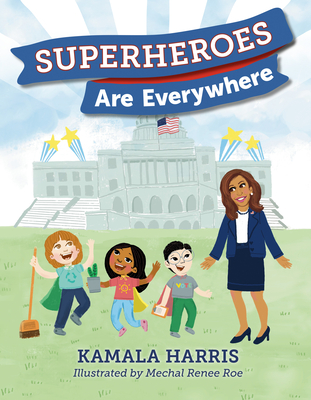 
In Stock—Click for Locations
From Vice President Kamala Harris comes a picture book with an empowering message: Superheroes are all around us--and if we try, we can all be heroes too. Now a #1 New York Times bestseller!

Before Kamala Harris was elected to the vice presidency, she was a little girl who loved superheroes. And when she looked around, she was amazed to find them everywhere! In her family, among her friends, even down the street--there were superheroes wherever she looked. And those superheroes showed her that all you need to do to be a superhero is to be the best that you can be.

In this empowering and joyful picture book that speaks directly to kids, Kamala Harris takes readers through her life and shows them that the power to make the world a better place is inside all of us. And with fun and engaging art by Mechal Renee Roe, as well as a guide to being a superhero at the end, this book is sure to have kids taking up the superhero mantle (cape and mask optional).

Praise for Superheroes Are Everywhere:

"This [book] offers a solid message: a superhero could be anyone, including you." --Booklist
Kamala Harris (kamalaharris.org) is the vice president of the United States of America. Before assuming the vice presidency, she served as a senator from California, worked in the Alameda County district attorney’s office, and was later elected district attorney of San Francisco and then Attorney General of California. The second Black woman and the first person of Indian descent ever elected to the U.S. Senate, and the first woman, Black person, and person of Indian descent ever to hold the office of vice president, she works hard to make sure all people have equal rights, especially kids. She’s married to Douglas Emhoff, and loves being a stepmom to Ella and Cole. You can follow Kamala Harris on Facebook at Facebook.com/KamalaHarris or on Twitter @KamalaHarris.

Mechal Renee Roe is an artist, designer, writer, and all-around creator. She loves creating for books, film, art, and animation. Originally from St. Louis, Missouri, she now lives in Atlanta, Georgia. You can follow Mechal Renee Roe on Instagram, Facebook, and Twitter @happyhairgirls and @mechalroe.
Praise for Superheroes Are Everywhere:

"This [book] offers a solid message: a superhero could be anyone, including you." --Booklist