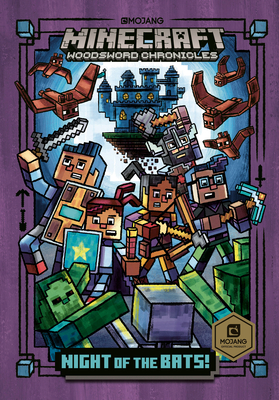 
On Our Shelves Now at:
The first official chapter book series based on Minecraft!

The adventures continue in the Minecraft Chapter Book series as five young Minecraft players find themselves transported inside the game they love. When zombie hordes attack them in the game, and bats invade their school in the real world, Ash, Morgan, and their friends realize that it's going to take all their talents to get to the bottom of these monstrous migrations. This illustrated hardcover series will thrill and engage fans of Minecraft and action-packed fantasy stories alike.

© 2019 Mojang AB and Mojang Synergies AB. MINECRAFT and MOJANG are trademarks or registered trademarks of Mojang Synergies AB.
Nick Eliopulos is the co-author (with Zack Loran Clark) of the middle-grade fantasy novel The Adventurers Guild, which was a Kirkus Best Book of 2017. He's written books for a variety of popular children's series, from Spirit Animals to DC Super Friends, and his comics work has appeared in anthologies Stuck in the Middle and First Kiss (Then Tell). A former children's book editor, Nick now works for Voracious Games as narrative designer on the forthcoming video game Potionomics. He was raised in Florida and lives in Brooklyn.