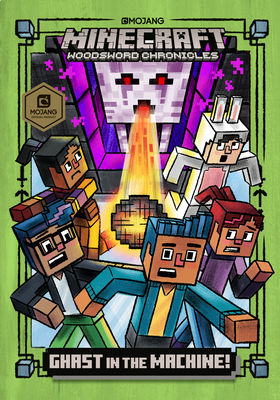 
In Stock—Click for Locations
Get ready for Book 4 in the only official chapter book series based on Minecraft!

TARGET CONSUMER: Minecraft players ages 6 and up, and kids who like humor and action-packed fantasy stories.

The adventures continue in the fourth Minecraft chapter book based on one of the most popular video games of all time. Jodi, Ash, Morgan and their fellow Minecraft players go out into the real world to find clues to the identity of the mysterious and sinister Evoker King. Not only do they need to find out who--or what--he is, but they need to know if it's really possible for him to escape the game! Because if he can, that could spell big trouble both in the game and out!

This illustrated hardcover chapter book series will thrill Minecraft fans who like humor and action-packed fantasy.
Nick Eliopulos is a children’s book author. His works include Super Friends: Flying High and Gulliver’s Travels.

Alan Batson is a British cartoonist and illustrator. His works include Everything I Need to Know I Learned from a Star Wars Little Golden Book, Everything That Glitters is Guy!, and Baby McStuffins.