Awkword Moments: A Lively Guide to the 100 Terms Smart People Should Know (Hardcover) 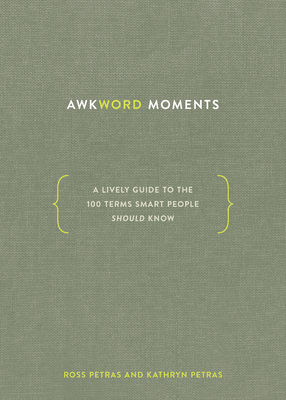 Awkword Moments: A Lively Guide to the 100 Terms Smart People Should Know (Hardcover)


Special Order—Subject to Availability
A compendium of 100 words and phrases smart people use--even if they only kinda sorta (secretly don't) know what they mean--with pithy definitions and fascinating etymologies to solidify their meanings.

Your boss makes a joke about Schrodinger's cat--which is something you've heard of but you're a little vague about what exactly happened (or didn't happen) with that cat. Or you're reading a New Yorker article that explains that "Solecism slipped into solipsism into full-blown narcissistic project." An excellent point . . . if you're sure what "solecism" means . . . or, for that matter, "solipsism."

Language gurus Ross Petras and Kathryn Petras to the rescue! In the breezy and entertaining yet informative style of their New York Times bestseller You're Saying It Wrong, they give you a brief rundown on words smart people should know--from the worlds of science and the arts to philosophy, and from broader topics like quantum physics and ontology to more specific ones like Plato's cave and trompe l'oeil. They cover the Latin phrases we hear and read (prima facie, sui generis, and the like) as well as those that have entered our vocabularies from other languages (bildungsroman, sturm und drang).

These are the words that, if you were asked directly, "What does this mean?" you might hem and haw and try to change the subject. After reading this book, you won't have to.
Kathryn Petras & Ross Petras are a sibling writing team with over 4.8 million copies of their work in print — including popular “word nerd” books such as the New York Times bestseller You’re Saying It Wrong, That Doesn’t Mean What You Think It Means, Very Bad Poetry, and, most recently, Awkword Moments. They do a podcast with NPR affiliate KMUW—kind of a Car Talk about words—called “You’re Saying It Wrong.” Their work has received the attention of, or has been featured in, diverse media outlets including the New York Times, Chicago Tribune, Wall Street Journal, Cosmopolitan, Washington Post, Huffington Post, Bustle, Atlantic Monthly, London Times, and McSweeney’s. They have also been guests on hundreds of radio shows and tv shows, including Good Morning America, CNN, Fox & Friends, and NPR’s Here and Now.