The Freedom Convoy: The Inside Story of Three Weeks That Shook the World (Paperback) 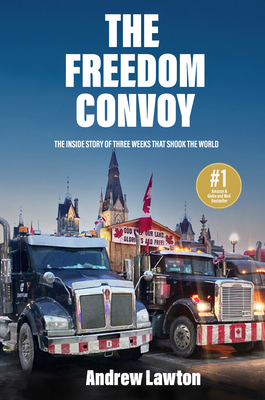 The Freedom Convoy: The Inside Story of Three Weeks That Shook the World (Paperback)


Not On Our Shelves—Ships in 1-5 Days
In January 2022, a small group of Canadian truckers fed up with nearly two years of Covid restrictions and a new vaccine mandate for cross-border essential workers decided to take their frustrations directly to the nation's capital. The Freedom Convoy quickly took on a life of its own as hundreds of trucks and thousands of protesters made the journey to Parliament Hill. For the next three weeks, the trucker convoy led a protest unlike any other, complete with bouncy castles, pig roasts, and late-night dance parties. But to the media and government, it was a hate-filled insurrection requiring the unprecedented invocation of the federal Emergencies Act. In this timely and provocative book, author Andrew Lawton combines his own on-the-ground reporting and countless hours of interviews with the Freedom Convoy's organizers and volunteers to tell, for the first time, the whole story of the convoy.
Andrew Lawton ============= Andrew Lawton is a senior journalist at True North and host of The Andrew Lawton Show. He previously hosted a daily talk show on Global News Radio. He has published written work across the world, including in the Washington Post, the National Post, the Toronto Sun, and on Global News.