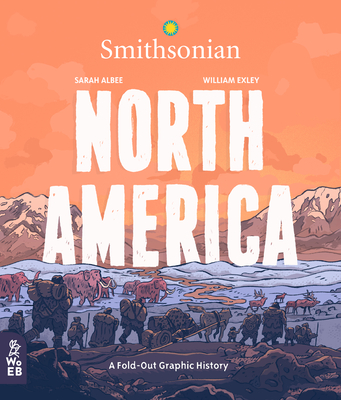 A richly illustrated, foldout graphic history of the United States, Canada, Mexico, and the islands of the Caribbean.

North American history unfolds in this graphic timeline that places the United States, Canadian and Mexican/Caribbean histories in the context of their continent. From healers in the Aleutian islands in 10,000 BCE to the first to cultivate corn in 3,000 BCE in Mexico to Canadian scientists studying butterfly migration in 1975. From the Aztecs of the city of Tenochtitlan to the Mississippians who built Cahokia to the Inuit of the arctic and the Taino of the Caribbean. Then there are Spanish, French, English, and other Europeans who invaded in the 1500s, the enslaved Africans forcibly brought to our shores, and millions more, from all around the world.

Ours is the story of creation and destruction, migration, exploration, conquest, wars, alliances, trade, governments, railroads, mutinies, panning for gold, invention, and art. It includes terrible injustices and amazing movements toward equality and freedom, and so much more. So unfold the book and immerse yourself in the vast tapestry that is North American history.

Sarah Albee is the New York Times bestselling author of many nonfiction history and science books for kids. She loves to travel, and has visited many places throughout North America. She lives in Connecticut with her husband, their three kids, and their dog, Rosie. Although she has written over 100 books for kids, this one is the longest book she's ever written. Literally. William Exley divides his time between writing and illustrating graphic novels - including Golemchik (Nobrow Press) - and illustrating children's nonfiction.