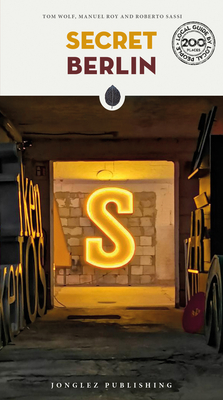 
Special Order—Subject to Availability
Wander around the hotel lobby where a glass floor reveals excavations of the old medieval town; take a seat in an amphitheatre where animal dissections once took place; let yourself be moved by the sounds of the largest pipe organ, still used today to bring silent films to life; take a break in one of the few well-preserved Baroque vaults housing coffins fitted with windows; climb onto a bunker that contained anti-aircraft guns during the Second World War and accept a Russian soldier's invitation to admire it from within; take a dip in one of the most beautiful bathing spots built during Europe's Art Nouveau movement; enjoy a stroll under the Spree river; go see the very first computer (designed by a Berliner) or the first synthesizer of East Germany; scale the mountain of rubble where a Skiing World Cup race was held; station yourself at the peak of the artificial hill where aviation pioneer Otto Lilienthal made his first attempts at flight; and grab a bite on the island in the Havel river where Werner von Braun launched his first rocket. Absent from the usual "must-see" lists despite residing in the heart of the bustling capital, fascinating historical treasures can be found all over Berlin's city centre and its large surrounding neighbourhoods. Take another look and discover the hidden gems eluding those who think they know Berlin inside out.
After earning his PhD in philosophy, Tom Wolf decided to dedicate himself to writing. He has written 22 crime novels, 3 guides inviting travellers to take a fresh look on the places they visit, and a guide on wines produced in the region of Brandenburg. After spending 12 years in Berlin-Mitte and Kreuzberg, he now lives in the north of the Berlin/Brandenburg metropolitan region where he looks after his vineyard and his small craft brewery. But that story is for another time ... Manuel Roy had been a Germanophile for many years when he discovered Berlin like a punch in the face. He had seen Germany through the verses of Schiller and the paintings of Caspar David Friedrich, and found himself in a post-apocalyptic landscape full of punks scrupulously respectful of the selective sorting of rubbish. He admits to not having understood everything straight away. Twenty years of research later, with a doctorate in philosophy under his belt, having been a Berliner by adoption since 2000, and a guide in Berlin since 2013, Manuel now thinks that he has a better grasp of the city. But amazement is never far away. Despite its recent gentrification, the city never ceases to shake him up and surprise him. And it would seem that he loves that. Born in 1986, Roberto Sassi is an urban sociologist. With Teresa Ciuffoletti, he is the author of the book Guida alla Berlino ribelle (Voland Edizioni, 2017) (Guide to rebellious Berlin, not yet translated). He regularly organises travel writing workshops and works with several journals, magazines among which the journal of the Goethe-Institut Italia, and websites. He lives in Prenzlauer Berg.