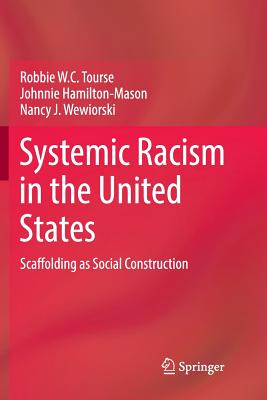 
Not On Our Shelves—Ships in 1-5 Days
(This book cannot be returned.)
Racial Scaffolding: Conceptual Overview.- Discrimination.- Institutional Legalization of Racism: Exploitation of the Core Groups.- Immigration through the Lens of Systemic Racism.- The Infrastructure of Racism: The Psychic Dimension.- The Infrastructure of Racism: The Institutional Dimensions.- Intersectionality: The Linkage of Racism with Other Forms of Discrimination.- Racism and Social Justice.- Deconstruction of Racism.
Dr. Robbie Welch Christler Tourse retired in 2008 from Boston College Graduate School of Social Work after a 29-year career at that institution. During her tenure there she was Director of Field Education, Coordinator of the Worcester/Paxton Off-Site Program, and taught in the clinical sequence. She received her B.A. from Spelman College, her M.S. from Simmons College School of Social Work and her Ph.D. from the Lynch School of Education at Boston College in Administration in Higher Education. Her clinical interests involve cultural/racial issues; transdisciplinary practice, particularly between public schools and mental health facilities in urban areas; and, field education. Dr. Tourse also developed and directed a social service department in a community development corporation before joining Boston College. In addition, throughout her years of clinical practice and public service she consulted with and/or co-led social work and medical groups as well as other entities on racial and cultural understanding and their integration in the work place. She has co-edited a book and has numerous publications in journals and chapters in books. Dr. Tourse has also presented papers in her areas of interests nationally and internationally. She received the Lifetime Achievement Award from the Massachusetts Chapter of the National Association of Social Workers in 2010. Since retirement, Dr. Tourse has been an adjunct professor at Simmons College School of Social Work teaching courses in human behavior, racism, and group work. Dr. Johnnie Hamilton-Mason is a Professor at Simmons College School of Social Work. She received her B.S. from the State College of Boston, a M.S.W. from Simmons College, and her Ph.D. from Smith College School for Social Work. From 2004- 2007, Dr. Hamilton-Mason served as Director of the Doctoral Program at Simmons College School of Social Work (SSW). She co-founded the SSW's Pharnal Longus Academy for Undoing Racism. From 2001 through 2008, she served as a Harvard University W.E.B. DuBois Institute non-resident fellow in African American research. Her scholarship and research interests are primarily on African American Women and Families, the intersection of cross cultural theory and practice, and HIV/AIDS prevention and treatment. In 2013 Dr. Hamilton-Mason received the Greatest Contribution to Social Work Education award from the Massachusetts Chapter of the National Association of Social Workers. Dr. Hamilton-Mason is well published in journals and chapters in books, and has presented nationally and internationally on race, culture, and other topics relevant to clinical practice. She has consulted in urban settings that reflect her areas of interest. Dr. Nancy J. Wewiorski is a Health Services Researcher with the Department of Veterans Affairs. She received her A.B. from Mount Holyoke College, her M.S.W. from Howard University School of Social Work and her Ph.D. from Boston College Graduate School of Social Work. Her doctoral dissertation was a study of organizational racism in human services agencies. She completed a post-doctoral research fellowship at Boston University and formerly was a research professor at Boston University. She has a longstanding career as a social work clinician, administrator and researcher. Her clinical and research interests are focused on disenfranchised populations, particularly persons of color, persons experiencing homelessness and adults with serious mental illness. She has published and presented on the topics of homelessness and recovery from serious mental illness and provides clinical and program consultation to human service agencies serving inner city populations.