Women in the History of Analytic Philosophy: Selected Papers of the Tilburg - Groningen Conference, 2019 (Hardcover) 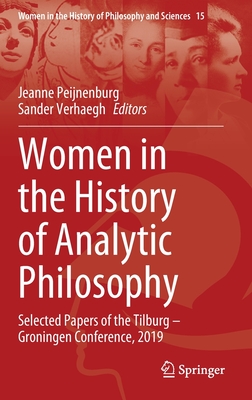 Women in the History of Analytic Philosophy: Selected Papers of the Tilburg - Groningen Conference, 2019 (Hardcover)


Not On Our Shelves—Ships in 1-5 Days
This book contains a selection of papers from the workshop Women in the History of Analytic Philosophy held in October 2019 in Tilburg, the Netherlands. It is the first volume devoted to the role of women in early analytic philosophy. It discusses the ideas of ten female philosophers and covers a period of over a hundred years, beginning with the contribution to the Significs Movement by Victoria, Lady Welby in the second half of the nineteenth century, and ending with Ruth Barcan Marcus's celebrated version of quantified modal logic after the Second World War. The book makes clear that women contributed substantially to the development of analytic philosophy in all areas of philosophy, from logic, epistemology, and philosophy of science, to ethics, metaphysics, and philosophy of language. It illustrates that although women's voices were no different from men's as regards their scope and versatility, they had a much harder time being heard. The book is aimed at historians of philosophy and scholars in gender studies

Jeanne Peijnenburg is a professor em. in Theoretical Philosophy at the University of Groningen in the Netherlands. She works in formal epistemology, analytic philosophy, and philosophy of science. Together with David Atkinson, she wrote a book on a probabilistic analysis of the regress problem (Fading Foundations, Springer Open Access, 2017). Her papers appeared in, among others, *Mind*, *Erkenntnis*, *Philosophical Studies*, *Synthese*, the *British Journal for the History of Philosophy*, *The Philosophical Quarterly*, *American Philosophical Quarterly*, *Studies in History and Philosophy of Science*, *History of Philosophy Quarterly*, *International Journal of Approximate Reasoning*, and the *Notre Dame Journal of Formal Logic*. Sander Verhaegh is assistant professor at the Tilburg Center for Logic, Ethics, and Philosophy of Science (TiLPS) at Tilburg University in the Netherlands. His research focuses on the history of analytic philosophy, the history of psychology, and philosophy of science. He published a book on the nature and development of W. V. Quine's naturalism (*Working from Within*, OUP 2018) and he is the principal investigator of the ERC StG/NWO Vidi project "Exiled Empiricists: American Philosophy and the Great Intellectual Migration". His work on the history of analytic philosophy has been published in, among others, the *Journal of the History of Philosophy*, *Erkenntnis*, *Philosophers' Imprint*, *Synthese*, the *British Journal for the History of Philosophy*, *Studies in the History and Philosophy of Science*, *HOPOS*, and the *Australasian Journal of Philosophy*