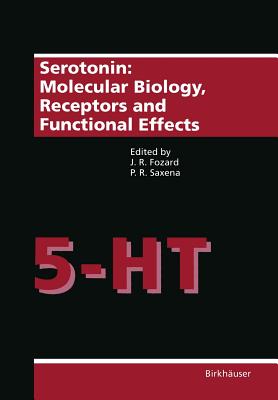 
Not On Our Shelves—Ships in 1-5 Days
The Second IUPHAR Satellite Meeting on Serotonin was held under the auspices of the Serotonin Club in Basel, Switzerland in July 1990. The scope was wide, ranging from molecular biology through in vitro and in vivo pharmacology to new drug tools and their clinical signifi- cance. There were three invited review lectures, by J. M. Palacios, D. I. Wallis and A. Kaumann, and S. Peroutka gave the first Serotonin Club Irvine H. Page Lecture. The rest of the oral programme was put together by the Scientific Organizing Committee based on volunteered research contributions. The invited review lecturers, the platform speak- ers and selected poster contributors were invited to write up their contributions for inclusion in this volume. Most complied and this book is the result of their efforts. When instructing the authors prior to the meeting, we emphasized that selected new data should be put in the context of the literature findings. In this way we hoped to achieve topicality yet preserve the review perspective which facilitates its appreciation by the non-special- ist. It was truly a pleasure to read the interesting papers which resulted and to prepare them for publication. We believe they convey to a remarkable degree the spirit of what was generally felt to be a highly stimulating exchange of information on matters serotonergic which took place in Basel last July.