Interpreting and Explaining Transcendence: Interdisciplinary Approaches to the Beyond (Religion and Reason #61) (Hardcover) 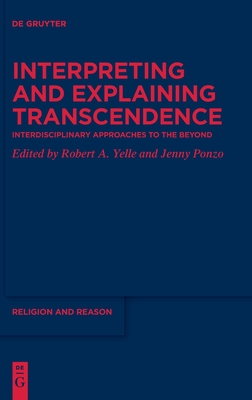 Interpreting and Explaining Transcendence: Interdisciplinary Approaches to the Beyond (Religion and Reason #61) (Hardcover)


Not On Our Shelves—Ships in 1-5 Days
In this volume, an interdisciplinary group of scholars uses history, sociology, anthropology, and semiotics to approach Transcendence as a human phenomenon, and shows the unavoidability of thinking with and through the Beyond. Religious experience has often been defined as an encounter with a transcendent God. Yet humans arguably have always tried to get outside or beyond themselves and society. The drive to exceed some limit or condition of finitude is an eduring aspect of culture, even in a "disenchanted" society that may have cut off most paths of access to the Beyond. The contributors to this volume demonstrate the humanity of Transcendence in various ways: as an effort to get beyond our crass physical materiality; as spiritual entrepreneurship; as the ecstasy of rituals of possession; and as a literary, aesthetic, and semiotic event. These efforts build from a shared conviction that Transcendene is thoroughly human, and accordingly avoid purely confessional and parochial approches while taking seriously the various claims and behavioral expressions of traditions in which Transcendence has been understood in theological terms.
Robert A. Yelle, University of Munich, Germany and Jenny Ponzo, University of Turin, Italy.