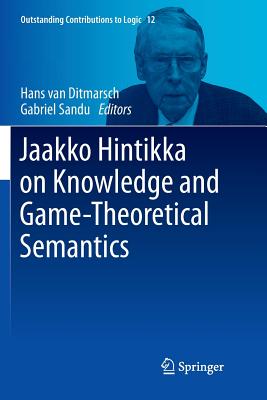 
Not On Our Shelves—Ships in 1-5 Days
Short overview of the development of Hintikka's work in logic.- From Pictures to Semantical Games: Hintikka's Journey through Semantic Representationalism.- Is natural semantics possible? - ordinary English, formal deformationscum-reformations and the limits of model theory.- Knowing-who in quantified epistemic logic.- Group Knowledge in Interrogative Epistemology.- Known Unknowns: Time bounds and Knowledge of Ignorance.- Topological Subset Space Models for Public Announcements.- Seeing is Believing: Formalising False-Belief Tasks in Dynamic Epistemic Logic.- Playing Cards with Hintikka.- On Semantic Games for Lukasiewicz Logic.- Hintikka and Frege on Quantifiers.- Dynamic Logics of Imperfect Information: From Teams and Games to Transitions.- Logical Dialogues with Explicit Preference Profiles and Strategy Selection.- Hintikka's Knowledge and Belief in Flux.- Possible worlds semantics based on observation and communication.- Knowledge, Time, and Paradox: Introducing Sequential Epistemic Logic.- Borel Sets in the Generalized Baire Space and Infinitary Languages.- Questions of Epistemic Logic in Hintikka.- The Proof Theory of Common Knowledge.- Knowability and a New Paradox of Happiness.- Some Tools for Analyzing Strategic Games of Independence-Friendly Logic and Their Applications.- Beyond knowing that: A new generation of epistemic logics.- Epistemic Logic with Evidence and Relevant Alternatives.
Hans van Ditmarsch has been a senior researcher at the CNRS (the French national organization for scientific research) since 2012 and is based at LORIA (Laboratoire Lorrain de Recherche en Informatique et ses Applications) in Nancy. He is also an associated researcher at the IMSc (Institute of Mathematical Sciences), Chennai. His research focuses on the dynamics of knowledge, information-based security protocols, modal logics for belief revision, proof tools for epistemic logics, combinatorics, and computer and information science education.Gabriel Sandu has been a professor of philosophy at the University of Helsinki since 1998, and is also a professor of philosophy at the Sorbonne University of Paris (Paris 1). His research chiefly concerns theories of truth, dependence and independence between quantifiers, and the application of game-theoretical methods to the study of formal languages that extend ordinary first-order languages (IF languages). This work, pursued in collaboration with Professor Jaakko Hintikka, challenges the universalist conception of logic and language, according to which one cannot express semantic relations in one and the same language. The most recent focus has been on importing concepts from classical game theory (Nash equilibria) into logic. The resulting notions of truth and logical consequence have led to Nash equilibrium semantics.