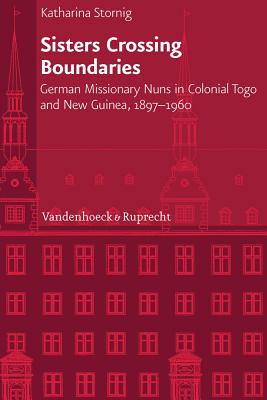 
Special Order—Subject to Availability
(This book cannot be returned.)
The last third of the 19th century witnessed a considerable increase in the active participation of women in the various Christian missions. Katharina Stornig focusses on the Catholic case, and particularly explores the activities and experiences of German missionary nuns, the so-called Servants of the Holy Spirit, in colonial Togo and New Guinea in the late 19th and first half of the 20th centuries. Introducing the nuns ambiguous roles as travelers, evangelists, believers, domestic workers, farmers, teachers, and nurses, Stornig highlights the ways in which these women shaped and were shaped by the missionary encounter and how they affected colonial societies more generally. Privileging the sources produced by nuns (i.e. letters, chronicles and reports) and emphasizing their activities, Sisters Crossing Boundaries profoundly challenges the frequent depiction of women and particularly nuns as the largely passive observers of the missionizing and colonizing activities of men. Stornig does not stop at adding women to the existing historical narrative of mission in Togo and New Guinea, but presents the hopes and strategies that German nuns related to the imagination and practice of empire. She also discusses the effects of boundary-crossing, both real and imagined, in the context of religion, gender and race.
Katharina Stornig is a research fellow at the Leibniz Institute of European History; currently she holds a scholarship from the Austrian Federal Ministry of Science and Research at the Austrian Historical Institute in Rome.