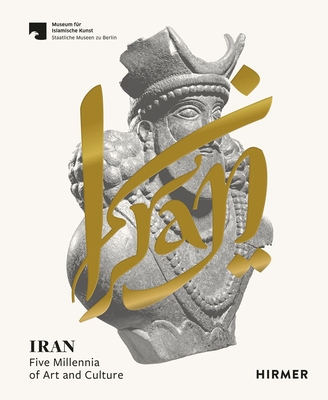 
On Our Shelves Now at:
A beautifully illustrated journey in time across Iran’s rich artistic history.

Iran: Five Millennia of Art and Culture presents 360 objects from the time of the first advanced civilizations during the third millennium BCE until the end of the Safavid Empire in the early eighteenth century. Amid searing deserts, lush forests, varied coastlines, and vast mountain ranges emerged one of the oldest civilizations and with it, a fascinating artistic culture that drew inspiration from the natural world. As these objects attest, Iran had outstanding significance as the initiator and center of intercultural exchange.

Exquisite artworks from the Sarikhani Collection in London and the Staatliche Museen zu Berlin invite visitors to embark on a journey through the cultural heritage of Iran. The highlights include works from the great pre-Islamic empires of the Achaemenids and the Sasanids, the establishment of a Persian-Islamic culture, the masterly artistic achievements of the ninth to the fifteenth centuries, and the Golden Age of the Safavids. Providing insight into the art of the courts and the urban elites, these works are brought together in a multifaceted kaleidoscope through an array of gorgeous full-color reproductions.
Ute Franke was the deputy director at the Museum für Islamische Kunst – Staatliche Museen zu Berlin until 2019.

Ina Sarikhani Sandmann is the director of the Sarikhani Collection, which is devoted to the arts of Iran.

Stefan Weber is the director of the Museum für Islamische Kunst – Staatliche Museen zu Berlin.
"Created to accompany an exhibit at Berlin’s Museum of Islamic Art, Iran: Five Millennia of Art and Culture is a richly illustrated catalogue detailing Iran’s history through material objects and artwork. The book’s scope is expansive, showcasing 360 objects from the earliest Mesopotamian city-states in the third millennium all the way through the 19th century. . . .  The images are astounding; in addition to the art from the exhibition, the catalogue includes contextual visuals and maps of Iran, cementing the fact that this volume is not just a display of Iranian art but also a celebration of Iran itself. This survey of Iranian culture and history will interest those researching art, history, geography, and Islamic studies. . . . Essential."
— Choice