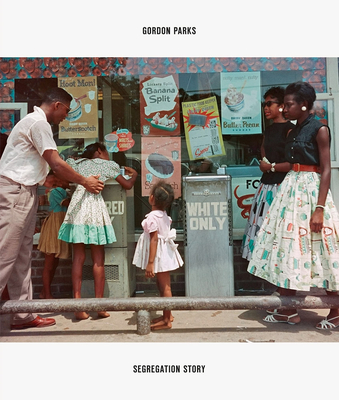 An expanded edition of Parks' classic account of race relations in America, with previously unpublished images and texts

This expanded edition of Gordon Parks: Segregation Story includes around 30 previously unpublished photographs, as well as enhanced reproductions created from Parks' original color transparencies; newly discovered descriptions Parks wrote for the photographs; a manuscript of film-developing instructions and captions Parks authored with Samuel F. Yette; previously published texts by the late art historian Maurice Berger and the esteemed journalist and civil rights activist Charlayne Hunter-Gault; and a new essay by artist Dawoud Bey.
After the photographs were first presented in a 1956 issue of Life magazine, the bulk of Parks' assignment was thought to be lost. In 2011, five years after Parks' death, the Gordon Parks Foundation found more than 200 color transparencies belonging to the series. In 2014 the series was first published as a book, and since then new photographs have been uncovered.
In the summer of 1956, Life magazine sent Gordon Parks to Alabama to document the daily realities of African Americans living under Jim Crow laws in the rural South. The resulting color photographs are among Parks' most powerful images, and, in the decades since, have become emblematic representations of race relations in America. Pursued at grave danger to the photographer himself, the project was an important chapter in Parks' career-long endeavor to use the camera as a weapon for social change.
Gordon Parks (1912-2006) was born into poverty and segregation in Fort Scott, Kansas, in 1912. An itinerant laborer, he worked as a brothel pianist and railcar porter, among other jobs, before buying a camera at a pawnshop, training himself and becoming a photographer. He evolved into a modern-day Renaissance man, finding success as a film director, writer and composer. The first African American director to helm a major motion picture, he helped launch the blaxploitation genre with his film Shaft (1971). Parks died in 2006.